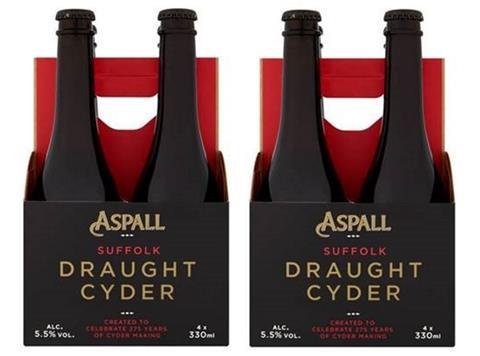 Aspall Cyder has launched a 4x330ml carry pack in to Tesco Express and Little Waitrose stores.

The format addressed “growing demand in the convenience sector” for carry packs and “offered shoppers a much more attractive option than carrying chinking bottles home in a plastic bag” said the brand (rsp: £5.99).

It has also rolled out its Raw Organic Unfiltered Cyder Vinegar into 255 Tesco stores in a 500ml bottle, having already hit shelves in Waitrose, Sainsbury’s, Ocado and Holland & Barrett (rsp: £2.70).

Aspall had “taken a keen interest in the potential health benefits of organic and raw cider vinegar for over 40 years” said its owner and director Henry Chevallier Guild.

It comes as brewing giant Molson Coors is reported to be eyeing the brand for acquisition, Sky News having reported last week that a deal could complete by the end of the year.