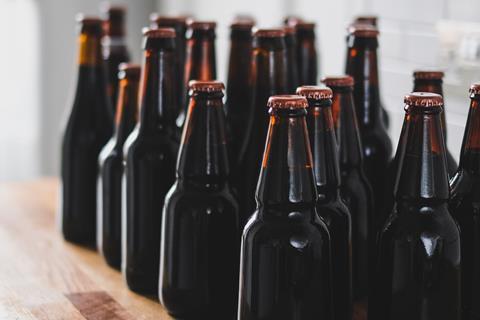 Britain could be facing a shortage of bottled beers thanks to the rising cost of producing glass, drinks suppliers have warned – with small and medium-sized breweries expected to bear the brunt of the impact.

Scottish wholesaler Dunns Food & Drinks predicted this week global supplies would dwindle thanks to the price of glass bottles jumping by as much as 80%.

Dunns Food & Drinks operations director Julie Dunn said: “Our wine and spirits suppliers from around the globe are facing ongoing struggles that will have a knock-on effect. As a result, there could be less variety in the bottled beers we see on UK shelves.”

Dunn added: “Some breweries will convert to cans to ensure consistent supply, whereas others will look at this as devaluing the brand so will inevitably pass the additional cost onto beer drinkers.”

Indeed, Edinburgh-based Vault City Brewery, for instance, is switching to can-only releases from June to keep costs down.

Vault City co-founder Steven Smith-Hay said: “We started introducing cans to our release schedule in January because of rising costs and challenges with availability.”

“This was initially just for our session sours and supermarket range, but because production prices are so high, we’ve decided to make all our beers can-only from June, with the exception of a few special releases each year.”

“We’re paying roughly 65p per bottle just now, which is around a 15p jump on what we were paying six months ago. If you think about the volume of beer we’re bottling even as a microbrewery, the costs really start to pile up. It’s just not viable to keep going in that direction.”

Glass isn’t the only commodity brewers are worried about.

Along with the cost of glass rising, “the cost of the fruit we use in the beer has gone up significantly” and as Ukraine was “the biggest supplier of malt, which is the number one ingredient of every beer, the price of malt has gotten more expensive” Vault City head of marketing Richard Wardrop told The Grocer.

“We also had an issue with some of the kegs that we sell into bars. Essentially, the connectors were manufactured in Ukraine as well. So we had to switch from the keg that we use, because some our suppliers advised there was going to be a shortage.”

As a result, it was “safest for us to move entirely to cans… you’re essentially trying to keep prices the same by offsetting some of the other costs”, Wardrop added.

But cans come with their own issues: one supplier told The Grocer beer brands ditching glass bottles would put pressure on the already limited supply of aluminium cans.

“If beer manufacturers are leaving glass, it’s only going to make it worse,” they said, adding there was “no room” for them.