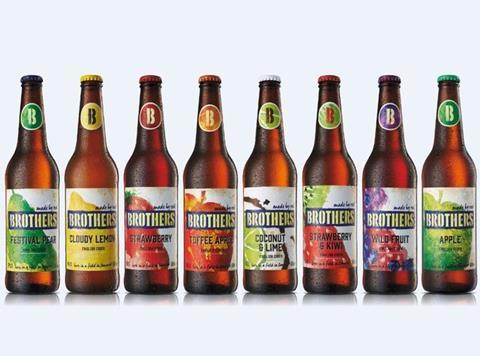 The Somerset business is also weighing up options for purchasing more of the production mill being closed by C&C.

More than 120 employees at the site face redundancy following the decision in January by C&C to move production to Ireland.

Brothers joint MD Matthew Showering said he hoped to take on some C&C workers but would not know how many until the £6m bottling line, which was unstaffed and had never been used by C&C, became operational in a few months’ time.

“We’ve had more orders than we can fill in past couple of years in our Shepton factory so we’ve lost business as we couldn’t fulfil it,” Showering added. “That was the main driver for this expansion, which doubles our capacity from 170 million a year. The demand is definitely there.”

Brothers, which has 125 staff at its own Shepton Mallet site, also produces and fills bottles for other brands and companies, as well as making its own range of pear and fruit ciders, with the contract manufacturing accounting for about half of the £20m business.

Billy Mason of C&C Group said: “We are pleased to have found a trade buyer for a part of the Shepton site and especially pleased that this will provide an opportunity for some C&C employees to join the Brothers team. We continue to explore options for the sale of remainder of the cidery.”

The cider mill is scheduled to close in the summer when production ceases and the pulped fruit is transported to Ireland, with the first 40 redundancies already announced.

Unite was critical of C&C and said there was still an urgent need for a buyer for the main site.

Regional co-ordinating officer Steve Preddy added: “The £6m bottling line was meant to be the saviour of the cider mill - the fact that it is being sold sums up the incompetence of the Irish-based owners C&C Group in the mismanagement of its Shepton Mallet operation.

“We wish Brothers Drinks well in the expansion of its production capability and hope it can employ as many dedicated cider workers as possible in the future.”