Three cheers for Champagne was probably not the message MEPs had in mind when they overwhelmingly backed plans last week for alcohol products to carry compulsory calorie labels.

Yet Drinkaware stats show the product ranks as one of the five lowest-calorie alcoholic drinks per typical serving, at the same time packing fewer units than an average portion of wine, beer or cider.

Also on the low-impact list are whisky, vodka, rum and gin. In fact, a drinker would have to put away no fewer than five small gin and slimline tonics to match the calories in a single pint of 5% abv lager, racking up nearly twice as many units of alcohol in the process.

So is the EU’s move in danger of sending dangerous mixed messages on booze, or is resistance driven (as critics claim) by protectionist fears of a backlash once consumers realise how many liquid calories they are shoving down their necks?

In October, a survey of more than 2,000 UK adults by the Royal Society for Public Health (RSPH) showed more than 80% of people did not know or underestimated the number of calories in a large glass of wine (13%=228) and over 60% of people were in the same boat over a pint of lager (5%=244).

Yet despite plans for calorie labelling being tabled as part of the government’s Alcohol Strategy in 2012 - along with the also shelved policy of minimum pricing - discussions got little further than a few soundings from short-lived health minister Anna Soubry and the long running but widely ignored campaign from supporters such as Labour peer Lord Brooke.

“The criteria the DH was really interested in was getting unit information on pack and that is what the industry has successfully done,” says one source. “Our argument was that, especially when we were trying to get people to start consuming lower-alcohol products through reformulation, this was not the time to start moving the goalposts.”

But with the industry last year hitting (just) its Responsibility Deal target of 80% of products carrying information on units and warnings to pregnant women, is there justification for not having calories on pack?

WSTA CEO Miles Beale claims the idea is a recipe for confusion: “Do consumers want calorie information per unit, per serving or per container?” He adds: “The best way of providing information would probably be online - accessed via smartphones.”

The Grocer understands the Portman Group, which also favours online communication, has already conducted trials with technology companies lining up to launch products able to provide calorie counts alongside other information. The RSPH says limiting information to online will mean thousands of consumers find information inaccessible, though it claims it is “keen to continue the conversation”.

While many suppliers and supermarkets - notably Tesco - have opposed plans for calorie labelling, others have made the leap, with The Co-operative Group (since 2002), and latterly Sainsbury’s and Waitrose rolling out calorie information on all or some of their own label lines.

In March, Diageo announced it would become the first drinks supplier to include nutritional information on all its lines - committing to labelling on pack whenever it could get local approval. Diageo’s head of alcohol in society Mark Baird says it is “inevitable” other suppliers will follow suit and says consumers have a right to information on pack - not just online.

He expects Diageo’s voluntary labels to be rolled out in the UK (information on calories per 100ml and per 25ml serving) before the EC gets around to rubber-stamping regulation.

However, as food companies will lament, changing labels to suit Europe is a hugely costly business, especially when you might be sending out a warning sign to potential customers about your product, so it will be no surprise if others have to be dragged along kicking and screaming. 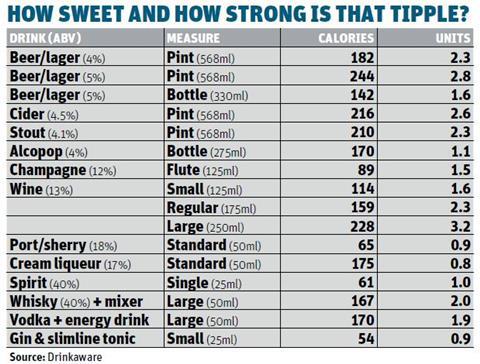