Carling customers kept in dark over savings on abv cut 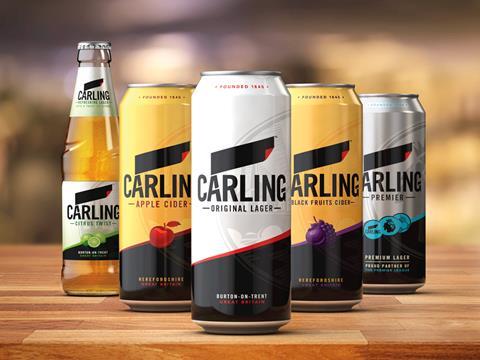 Molson Coors admitted a reformulation switch in September 2012 to manufacture Carling at a targeted 3.7% abv

Brewing giant Molson Coors reduced the strength of flagship UK lager Carling in a bid to save millions in tax - but didn’t change the strength recorded on its labels to prevent its customers from “demanding a slice”, it has emerged.

The astonishing admission was made in a tax tribunal at the Royal Courts of Justice, which concluded in March, and whose details The Grocer has obtained, in which Molson Coors Brewing Company appealed against an HMRC claim that it owed more than £50m in unpaid duty.

The appeal, which Molson won, heard how it slashed the amount it paid in tax after a reformulation switch in September 2012 to manufacture Carling at a targeted 3.7% abv.

But MCBC successfully argued it should not have to pay the tax because it had reduced the strength of its beer. Philip Rutherford, VP of tax for Molson Coors Europe, told the hearing, held in February and March this year, that MCBC set out to achieve a reduction in its tax liabilities with a reformulation to meet a 3.7% abv, with operating limits of between 3.6% to 4.4%, in order to lower its tax liability.

Giving evidence, VP of global R&D Paul Dove and marketing director Martin Coyle described how MCBC carried out consumer taste tests on a range of different abv values for Carling from just below 4% to 3.7% “in an attempt to establish the level at which there might be a negative reaction”, the tribunal papers note.

“It was found that consumers were broadly tolerant from a taste perspective if the abv was reduced to 3.7%,” Dove was reported to have said. Coyle claimed consumers actually “preferred” the lower abv.

However, MCBC did not change the labels on its Carling products, which continued as 4% abv. According to Rutherford this was because MCBC planned to reduce its costs without telling its [business] customers.

“The rationale for introducing the new method of calculating its liability to duty was to achieve a reduction in its costs base as less duty would be payable on the actual abv of the beer than if calculated on the basis of that stated on the label,” the tribunal document noted. “[Rutherford] said a key driver for the decision not to change the labelled abv was to protect MCBC’s cost base saving as many of its customers would ‘demand a slice’ of the saving if this was reduced,” the tribunal report noted, “explaining that where other cost base saving methods had previously been introduced these were not necessarily communicated to customers [either].”

Between March and April 2013, new equipment was installed at its breweries to allow MCBC to blend the beer more accurately and achieve a greater degree of consistency at the lower level of alcohol, and new meters were installed so it could check abv levels.

Although Molson’s appeal was successful, the court recorded several ‘findings of fact’ including the fact that it did not change the information on the labels in order that it could slash its cost base without alerting its retail customers.

“In its calculation of duty by reference to the actual abv of the beer brewed, rather than the abv stated on the label was to reduce its cost base and prevent its customers, who were not aware of the reduction in abv from, as Mr Rutherford put it, demanding “a slice” of the cost saving,” the court recorded.

“However, we note this did not contravene the statutory labelling requirements, which provide for a +/- 0.5% abv labelling tolerance,” the court noted. “And MCBC was careful not to alienate consumers who, taste tests indicated, preferred the beer with the lower abv.”

A raft of other companies have cut the strength of their beers abv, in order to reduce their tax liabilities savings. In February 2013 Heineken reduced the strength of its John Smith’s Bitter and John Smith’s Extra Smooth beers from 3.8% to 3.4% and advised its retail and on-trade customers that all draught and canned product delivered from February would switch to 3.6% abv rather than 3.8%. In the summer of 2012 Heineken cut the abv of its packaged Strongbow’s abv from 5.3% to 5%, while six months previously lager brands Stella Artois, Budweiser, Beck’s, Carlsberg Export and Cobra dropped from 5% to 4.8% abv.

Carlsberg also slashed the abv of Skol lager in the UK to 2.8%, from 3% previously, in response to tax breaks for lower alcohol lager, which the government had introduced to encourage consumption of lower abv alcohol.

An MCBC spokesman said: “Molson Coors was this year involved in a highly technical tax tribunal with HMRC that concluded in April with a ruling entirely in our favour.

“The specialist tax tribunal took place to provide definitive legal opinion on the correct interpretation of complex and technical legislation. It followed several years of detailed and constructive dialogue between HMRC and Molson Coors.

Consistent with the law

“The tribunal found in favour of Molson Coors on every legal point that was in dispute and concluded that Molson Coors’ calculation of duty and labelling of beer was entirely consistent with the law. In June HMRC elected not to appeal the decision of the tribunal.

“Brewing is a natural process and as such there is the potential for small variances in actual ABV, on a brew by brew basis. The law recognises this, as it does for many consumables, by permitting all brewers a small and tightly defined labelling tolerance range.

“Our consumers have been drinking and enjoying Carling for decades. We regularly do extensive taste testing with them and they tell us the beer has never tasted better. We continually invest in our brands and our beers to improve the quality, great taste and enjoyment of our beers. We are proud of the quality of the beers we brew and are privileged and delighted that so many consumers choose to drink them.”

Since the details of the case were revealed two leading brewers, C&C Group and Heineken, have criticised Molson for switching Carling to a targeted 3.7%, whilst keeping the figure started on the labels as 4%.

“At C&C, we always brew our products, like Tennent’s Lager and Magners, to the very best quality and to the stated ABV,” said a C&C Group spokesman.

“We’d never settle for anything less. Trust lies at the heart of our business. That’s what built the especially strong relationships we hold with our customers and drinkers. We value their confidence in us above all else.

A spokesman for Heineken said: “When we sell a 4% beer, we brew the beer to be 4%, we label it as 4% and we pay beer duty on 4%. Our customers and consumers would expect nothing less.”