Diageo extends Smirnoff Cider range ahead of the summer 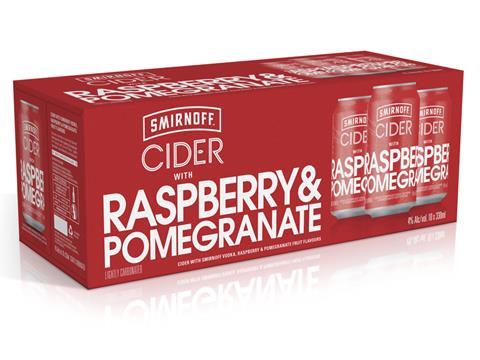 Diageo has extended its Smirnoff Cider range ahead of the summer, with a new Mandarin & Pink Grapefruit flavour and a 330ml can format aimed at festival goers.

The Mandarin & Pink Grapefruit variant is available to the off-trade now in a 500ml glass bottle format (rsp: £2.99), while the existing duo of Passionfruit & Lime and Raspberry & Pomegranate have been poured into the new 330ml can format, available now in multipacks to tap out-of-home and festival occasions (rsp: £10/10x330ml).

“Our new Smirnoff Cider flavour aims to drive excitement and growth into the flourishing fruit cider category, with a refreshingly citrusy flavoured cider that is less sweet and more lightly carbonated than similar products on the market,” said Katie Hunter, innovation commercialisation manager at Diageo GB.

“In addition, the new can formats will make the range an even more compelling offering for retailers, enabling them to unlock the full potential of the cider category.”