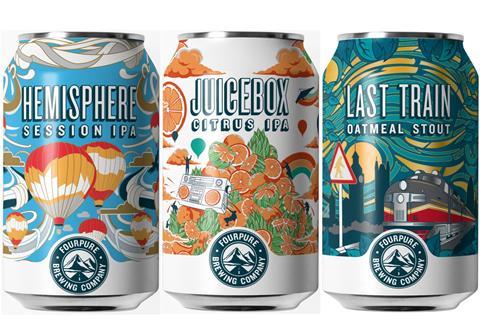 Fourpure boosted its annual production to 6.6 million litres this year

London-based brewery Fourpure is getting a major makeover, The Grocer can reveal.

The brand, whose beers are sold across the mults, has completely revamped its core range of beers, upping the range from four to eight brews.

“Although our previous branding served us well over an incredibly successful six years for the brewery, we wanted to invest in a rebrand that represents where the craft beer movement is at now,” said the brand’s head of marketing Adrian Lugg, adding the new look was inspired by “Fourpure’s well established association with adventure”.

It comes as Fourpure recently completed a major expansion of its Bermondsey brewery and taproom, boosting its annual production capacity to 66,000 hectolitres (6.6 million litres) and opening a new 43-tap bar.

The brand was bought by Australian brewing giant Lion last year – since then Lion has also acquired Yorkshire craft brewer Magic Rock, making it a significant player in the craft sector.

Fourpure’s CEO and co-founder Dan Lowe stepped down from the helm of the business last month, but will be staying on in an advisory role on a part-time basis. In his stead, Fourpure will be led by Lion’s UK & regional director, Toby Knowles.