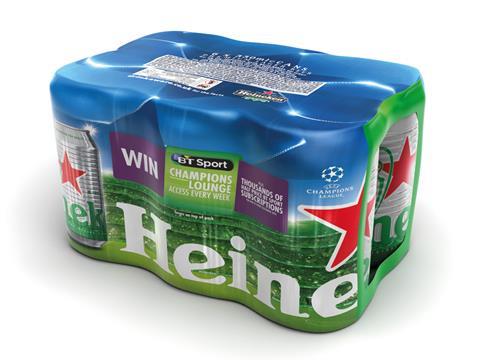 Heineken is rolling out an on-pack promotion to highlight its partnership with the UEFA Champions League.

Thousands of limited-edition packs will offer shoppers the chance to win prizes including access for five to the Heineken & BT Sport Champions Lounge, featuring a live link to the BT Sport studio to chat with football pundits. There will also be a draw every week until 3 March, which will see a total of 4,500 people bagging half-price BT Sport subscriptions (new customers only).

The on-pack drive will give the lager brand “incredible visibility on-shelf”, according to Craig Clarkson, off-trade and category director at Heineken. “This is a fantastic opportunity to drive mid-week sales, with Tuesday and Wednesday match nights offering retailers the chance to bring the quiet night in occasion to life.”