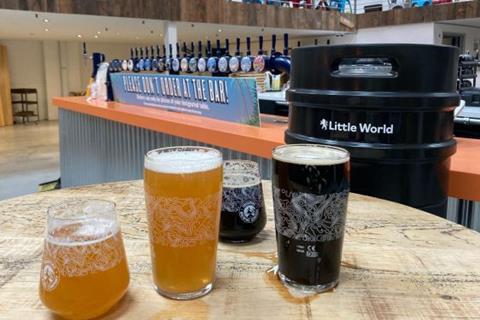 Fourpure Brewing Co and Magic Rock owner Lion Little World Beverages has sparked controversy in the beer trade with the announcement of a plan to give free beer to pubs in exchange for listings.

Dubbed the ‘cash flow scheme’, Lion Little World will offer pubs and bars up to 12 kegs of beer on the condition they then take on the lines for a year-long contract.

The past year had been “incredibly hard on hospitality and we want to make sure we’re doing everything we can to support our on-trade customers” said Chris Beaver, head of on-trade at Lion Little World Beverages.

However, the announcement was met with criticism from voices in the beer industry, who argued it risked reducing choice by shutting out smaller brands and independents from the market.

“It means indies and other breweries that can’t afford to offer free stock won’t be able to access those lines and long term means less competition and choice in the marketplace,” one source told The Grocer.

It was “yet another example of the big guys using financial muscle the smaller guys just don’t have to effectively cut off access to taps – which is already a massive issue because of the tied pub model”.

Beaver stressed Lion Little World’s “primary focus” was “to support our customers after an incredibly difficult year for the hospitality industry”.

“An effective way to do this is increase their cash flow and offer free stock of our exceptional craft beer range to those who want it,” he said.

“We have the resources to be able to support our valued customers, so giving them the option to adopt this scheme is our way of doing what we can to help during this time,” he added.

Lion Little World is also offering to replace out-of-date kegs that expired over lockdown with kegs of fresh beer.