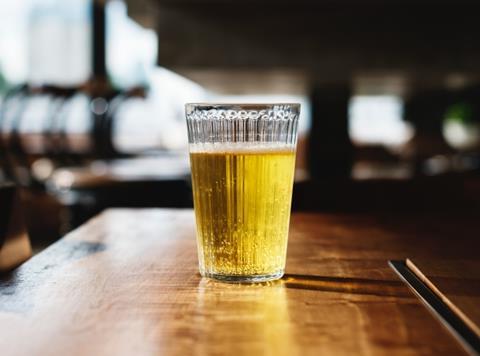 In the classic Simpsons episode ‘Lisa the Vegetarian’, Apu reveals a secret passageway hidden behind a fake non-alcoholic beer cooler in the Kwik-E-Mart. It leads to a secret roof garden where the shopkeeper tends plants and plays the bongos with Paul McCartney. When the bemused Lisa asks Apu what he does if ever someone wants to buy a non-alcoholic beer, he admits: “You know, it’s never come up.”

Things are very different now: Homer-esque levels of alcohol consumption are on the wane, all the while low-alcohol booze has taken the mults by storm.

The drinks industry has its knickers in a right old twist over how these products are labelled and sold: under current regulations, products can only be called ‘low-alcohol’ if they’re below 1.2% abv, ‘non-alcoholic’ can only be used to refer to religious plonk (such as communion wine), ‘alcohol-free’ products must be 0.05% abv or lower, and ‘de-alcoholised’ lower than 0.5%.

A bugbear for many brands is that European brewers are allowed to call their products ‘alcohol-free’ if they are 0.5% or lower. Some claim this creates an uneven pitch for British brands to play on. As Chris Hannaway of low-alcohol brewery Infinite Session puts it: “We’re completely out of sync with the rest of the world on this – it’s confusing for consumers and producers. If you look at the shelves of Tesco, who have the largest amount of low and no-alcohol products, some 14 out of 16 brands are from abroad. And they can call themselves ‘alcohol-free’ and we can’t.”

But what then of transparency? Other brands, such as St Peter’s Brewery, which makes 0.0% ‘Without’ ale, argue raising the cut-off to 0.5% would disenfranchise legitimately alcohol-free brands, and mislead consumers. It is, as St Peter’s CEO Steve Magnall mockingly says, “a bit like giving a vegetarian a salad with some thinly cut ham”.

So much for making things simpler for the consumer, then. Thankfully, regulations are due to be replaced this December, and a public consultation on the matter has just closed, having inspired fierce debate from many corners of the trade.

Having so many tightly regulated-descriptors for a slew of products that it wouldn’t be unreasonable to suggest serve essentially the same purpose is not only unnecessary, but unhelpful. More clarity here can only be a positive.

Setting the ‘alcohol-free’ boundary at 0.5% would certainly make things easier for home-grown brands, which, given the zeitgeist (don’t mention the ‘B’ word), seems appropriate. Isn’t sticking it to European hegemony all the rage this year?

The other side of this argument, of course, is that we’re going to need bountiful British producers in good health if our departure from the EU is as traumatic to the food and drink industry as many of the sector’s experts expect.

Then there’s the matter of tax – HMRC considers any product of 0.5% abv or higher alcoholic (though products that don’t exceed 1.2% don’t pay). In setting that bottom boundary, albeit with higher-alcohol products in mind, hasn’t the government in effect closed the matter already? That a 0.4% abv beer isn’t technically deemed alcoholic by the taxman, but is forbidden from calling itself ‘alcohol-free’ seems somewhat unintelligent.

This doesn’t mean transparency isn’t important. Consumers, now more than ever, want to know what’s in their food and drink – and how much of it there is. Often for good reasons: those with severe allergies to certain things, for instance, or sober alcoholics, who may be unlikely to savour the prospect of consuming any alcohol, no matter how small the measure.

A change might perturb some religious bodies, especially those with strict rules. But views on alcohol consumption vary vastly between sects of the major religions, let alone the religions themselves.

Quakers, for instance, are commonly cited as absolute teetotallers, whereas in reality booze is only banned from their meeting houses. In Islam, meanwhile, the rules are equally hazy across its many denominations (interestingly enough, according to askthesheikh.com, Iran’s Ayatollah Khamenei has called drinks containing 0.1% alcohol “pure and lawful”).

And it’s not as if 0.5% abv brands are being forced to play alongside regular-strength booze. Some just feel ‘de-alcoholised’ is a vague and unhelpful way to get their message across to consumers. Admittedly, it’s a less sexy way of saying ‘alcohol-free’.

All of which makes raising the threshold for ‘alcohol-free’ labelling to 0.5% simply the most pragmatic answer, if not entirely satisfactory.

Because regardless of how these products market themselves, any drink with a touch of alcohol in will still have to declare so on its packaging, whether it’s 0.5% or 0.05%. Those consumers who are set on buying only 0.05% products, for whatever reasons, will still be able to check. And brands that are 0.05% will still be free to play up that fact in their marketing.

In any case, the results of the consultation can’t come quickly enough. Given the way the market is going (not to mention the duty incentive), the number of these products on supermarket shelves looks certain only to grow.

Just remember, neither 0.5% nor 0.05% beers will get you drunk, no matter how many you knock back. Drinking a fair few may, however, send you scrambling repeatedly to the bathroom like the proverbial goat. D’oh!