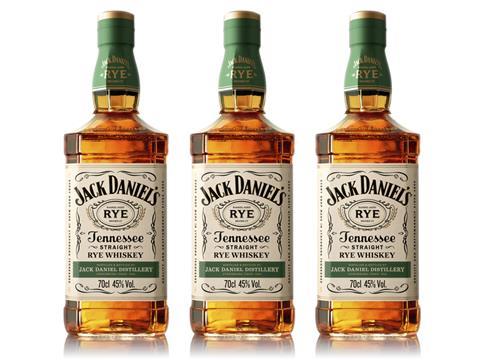 Jack Daniel’s is to add Tennessee Rye Whiskey to its core UK range next month.

The Brown-Forman brand’s latest NPD will sit alongside Old No.7 and Jack Daniel’s Honey. The 45% abv whiskey is set to hit supermarket shelves from late October, coinciding with its launch in the US. The price is yet to be confirmed.

Tennessee Rye was “spicy in flavour, but sipping smooth in character”, said the brand.

The NPD follows the 2016 launch of the super-premium Jack Daniel’s Single Barrel Rye (with a price tag of £50.99), created to mark Jack Daniel’s 150th birthday and “appeal to the increasing popularity of rye whiskies among consumers”.

It comes as JD this month mounted a push in supermarkets and c-stores. Called Taste of Tennessee, it featured cocktail kits for the recently-launched premix Lynchburg Lemonade in Asda, and limited-edition Old No.7 gift cases in Sainsbury’s, accompanied by sampling activity.

The brand has also kicked off competitions in c-stores, offering shoppers the chance to win a trip to its Tennessee distillery. It has also launched Lynchburg Lemonade for a limited run in Costco, packaged with a bottle of whiskey and a recipe card designed to encourage consumers to recreate the lemonade drink at home.