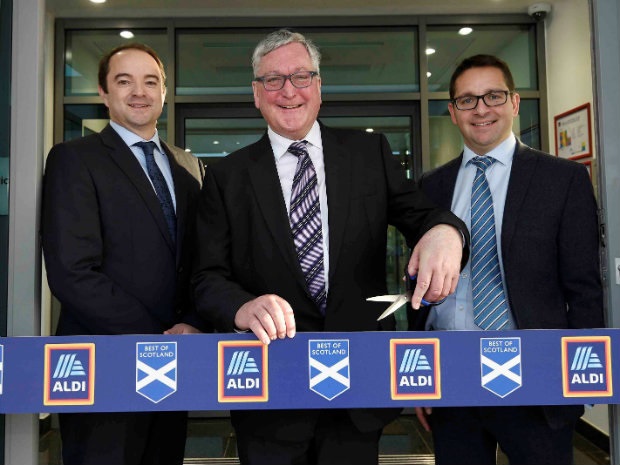 Aldi is set to capitalise on consumer demand for locally sourced products after launching a scheme to boost the profile of small-scale Scottish suppliers.

It has unveiled a Scottish Small Supplier Development Programme, designed to support food and drink suppliers north of the border and increase their chances of gaining listings with the discounter.

Aldi said the Scotland Food and Drink-backed programme had no fixed limit on the number of suppliers it would accept, with each case assessed on merit.

Products brought to market as part of the scheme would have their Scottish origins marked out with a clearly visible Saltire on pack, while qualifying suppliers would also receive subsidised costs and assistance from Aldi’s quality assurance team “from concept to shelf”, the discounter added.

The announcement was made at Aldi’s new Scottish headquarters in Bathgate, West Lothian, on Friday as MSP and rural economy secretary Fergus Ewing opened the multimillion pound facility.

“We know from extensive research that 70% of Scots believe the availability of locally sourced products is important. This initiative will help meet consumer appetite for Scottish products and I encourage smaller Scottish producers to get involved,” said Scotland Food and Drink CEO James Withers.

In May, Aldi announced its commitment to boosting its investment in Scotland, outlining plans to increase its range of Scottish products from 350 to 400 over two years, with the supplier programme forming part of that promise. Aldi’s range currently features a minimum of 30% Scottish produce.

“For a lot of small food and drink businesses, trying to secure a listing with a major retailer puts huge pressure on their team,” said Graham Nicolson, group buying director at Aldi. “We’ve launched this development programme to make it easier for companies to get their products on our shelves and to give our customers access to the most exciting and best quality new products from Scotland.”