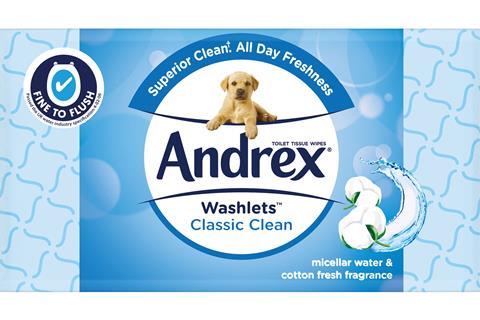 Andrex has received Fine to Flush certification for its Washlets portfolio of wipes.

The Kimberly-Clark-owned brand said it was the “first major brand” to receive this certification, which means the wipes can pass safely through sewer systems without creating blockages.

Andrex said it had reformulated the range specifically to achieve the certification, adding its Washlets “dispersed faster than the previous product, making them easier to break down for the sewer system”.

They are also biodegradable, made from 100% natural fibres and do not contain any plastic.

The Fine to Flush logo will first appear on Andrex Classic Clean Washlets from today (27 February), before rolling out to the rest of its Washlets range during the spring.

Baby wipes, cosmetic wipes and household wipes are the cause of some 60% to 75% of sewer blockages, according to Water Research UK.

Andrex said it was now working on recyclable packaging for its Washlets, that would allow consumers to recycle them with carrier bags at local supermarkets.

It recently removed plastic handles from wrapped packs of Andrex toilet tissue, a move it said would slash 31 tonnes of plastic from its supply chain annually.