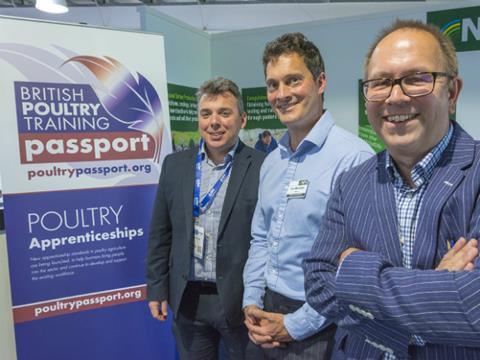 Members of the poultry sector have teamed up to create a new apprenticeship scheme, designed to provide a pipeline of skilled workers for the industry and to develop existing talent.

The new scheme will be managed by British Poultry Training - an alliance between the NFU, British Poultry Council and training bodies Lantra and Poultec - with support from farmers and processors including PD Hook, Avara and Moy Park.

The apprenticeships would strengthen the sector’s existing four-level Poultry Passport development scheme, said the NFU. It will be funded through the Apprenticeship Levy.

A poultry worker apprenticeship - designed for hatchery operators and stockspeople - and a higher level poultry technician apprenticeship for farm and hatchery managers will replace the sector’s existing poultry NVQ Level 2 and 3 in England later this year.

But as devolved parliaments and assemblies elsewhere in the UK oversee skills policy and the delivery of apprenticeships, the existing NVQ standards will remain in Wales, Scotland and Northern Ireland.

The new apprenticeships would place “a greater emphasis on all-round development”, in line with other areas of the food supply chain that were also investing in apprenticeships, including food science, butchery, processing and engineering.

“The new apprenticeship standards will help position us as a responsible food sector that is fit for the future and demonstrate how we are playing a vital role in shaping the future of young people,” said BPC chief executive Richard Griffiths.

“Recruiting, training and retaining high-calibre talent will not only take our sector from strength to strength but will also bolster the heart of Britain’s food supply and secure it for generations to come.”

BPT chair Andrew Brodie added: “Our vision for the new model of poultry apprenticeships is one which delivers tangible skills and mentoring in the workplace, leads to a return on investment for the employer and provides full competence for the apprentice.

“Through the new apprenticeship standards, poultry businesses will be able to review and put in place training plans to develop their whole workforce, effectively grow their skills base and offer great apprenticeship opportunities to Britain’s school leavers.”