Asda builds its presence in South with new approvals

It is easy to assume the UK has reached - or is nearing - saturation as far as the property ambitions of the big four supermarkets is concerned. But just a year ago, Asda’s property and multichannel director Karen Hubbard told The Grocer there were still vast areas of the country Asda had its eye on.

“Whilst we’re the second-biggest grocery retailer in the UK, over 47% of the UK public say they don’t have access to a physical Asda store,” she said.

It is no secret these areas are largely in London, the South East and South West; the retailer has always been much better represented in its Northern heartland and Scotland. This became even more so following its £778m acquisition of 193 Netto stores in 2010.

As expected, therefore, the latest data on Asda’s planning moves compiled for The Grocer by Glenigan shows the bulk of the retailer’s planning approvals and construction projects are focused in the south.

In the year to March 2014, Asda secured more planning approvals in the South East than in any other region -seven in total - but it also landed four in the South West and two in London. This was out of a total of 30 approvals.

During the same period, Asda started 24 new construction projects, of which four are in London, four in the South East and two in the South West.

Although the south is a clear focus, Glenigan’s data shows Asda does not intend to neglect its heartland. Of the 32 applications for new builds it filed in the year to March, six were in the North West and another six in the Yorkshire & Humberside region. At the same time, it filed for three new projects in London, four in the South East and three in the South West.

The Glenigan figures do, however, show Asda is also focusing its attention on the convenience sector. Unlike its rivals, it has no traditional c-stores and its strategy in this area has so far consisted of a couple of standalone forecourt sites and various click & collect options.

The retailer is still at an early and experimental stage with convenience and admitted recently it was years away from developing its full convenience strategy. However, standalone petrol forecourts are expected to play a key role. It is looking to use these sites as click & collect bases as well.

Asda only has two forecourt stores at present, but clearly has an appetite for more: it has made 33 applications for forecourts in the last two years, with 22 having received planning approval during that period, and construction work having started on 16.

On a visit to the UK in April, during which he met up with David Cameron, Doug McMillon, CEO of Asda parent company Walmart, pledged to create 12,000 new jobs in the UK over the next five years. At the time, Asda said it was looking to build about 40 large stores, 100 supermarkets and 50 forecourt stores over that period.

The Glenigan data suggests the majority of this is already well down the planning pipeline, but growth could slow beyond that. 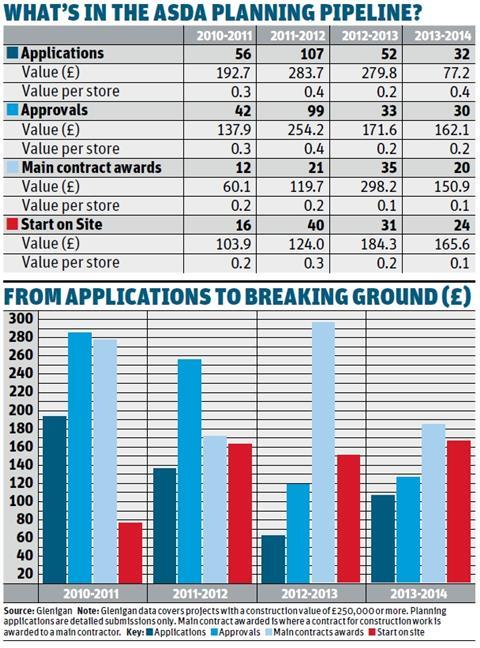