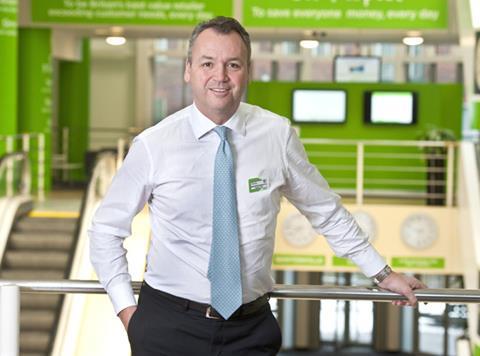 Andy Clarke has intervened in the Scottish referendum debate

Asda CEO and president Andy Clarke has made the most dramatic intervention in the Scottish referendum debate yet by a UK food retailer, saying that an independent Scotland would see rising food costs.

In a statement today, Clarke said he would be “ducking his responsibility” if he did not offer an “honest assessment of what independence could mean for Asda”.

“It will be no surprise to voters that, if Scotland votes for independence, it would be imperative to establish a separate Scottish business. Currently, our systems are set up for one single UK market, we use the same currency and we operate under the same rates of VAT. By operating in a market serving 63 million customers we achieve major efficiencies and economies of scale.

“If we were no longer to operate in one state with one market and – broadly – one set of rules, our business model would inevitably become more complex”

“If we were no longer to operate in one state with one market and – broadly – one set of rules, our business model would inevitably become more complex. We would have to reflect our cost to operate here.

“This is not an argument for or against independence, it is simply an honest recognition of the costs that change could bring. For us the customer is always right and this important decision is in their hands.”

Clarke added that the vote, which takes place on Thursday 18 September, was “a matter for the people of Scotland”.

Clarke had previously declared that food costs would be likely to rise in the event of Scottish independence, in a letter to the Herald in December 2013.

He wrote: “Already it costs more money to get groceries to people in Scotland, our taxes are higher and our margins are lower.

The last 24 hours have seen a number of financial companies including Lloyds and RBS indicating they would shift their headquarters south of the border over fears around the economic consequences of independence. Today, Tesco Bank declared it too would move its head office from Edinburgh in the event of a ‘Yes’ vote.

Food retailers have remained wary of intervening in the debate so far, although Morrisons CEO Dalton Philips also suggested prices could increase in comments to the Financial Times in December.

John Lewis Partnership chairman Sir Charlie Mayfield told the BBC this morning higher costs in the event of a Yes vote were “likely” to be passed on to consumers. “When we are talking about two separate countries it is most probable that retailers will start pricing differently.”

A Morrisons spokesman said today: “Morrisons is neutral on the issue of Scottish Independence as we believe it is a matter for the people of Scotland to decide. We have consistently said that if the cost of doing business was to change in an independent Scotland due to government policies, then Morrisons would have to consider raising or indeed lowering prices in that independent Scotland to reflect those differing costs.”

A Tesco spokeswoman added: “We are neutral on the referendum. It is a matter for the Scottish people. Our sole focus is on giving our customers in Scotland great service, which we will continue to do whatever the outcome.”

‘Prices will not go up’

The Scottish National Party has repeatedly denied that a vote for independence would lead to rising food costs.

“Last week Tesco confirmed that despite the suggestions of the no campaign, they would continue to offer the most competitive prices to their customers and as Asda make clear today, post-independence they would have to reflect their operating costs. We welcome that, as our plans for an independent Scotland would reduce business costs such as corporation tax and we have also made clear that we will also examine the benefits of introducing a fuel duty regulator which will help with fuel costs. What Asda have confirmed today is that such changes in costs would be reflected – and that is welcome.”

Responding to Andy Clarke’s comments, a spokesman for Yes Scotland said: “Tesco says this is not the case and no one will believe that Asda is about to lose out to another supermarket giant.”

Andrew Don contributed to this report.