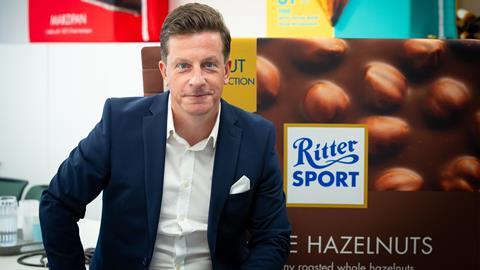 Benedict Daniels: the man who made Ritter Sport a UK name

Benedict Daniels made the ‘special, strange’ brand of his childhood a hit on these shores. Now he’s facing a fresh challenge in the form of HFSS rules

Ritter Sport UK’s HQ is in Leeds city centre – by chance, where its MD Benedict Daniels first encountered the German chocolate brand 35 years ago. While on a local shopping trip with his mum, she decided to treat herself to Ritter’s Joghurt block bar.

“I remember distinctly,” says the 45-year-old Yorkshireman. “She snapped off one square at a time, and she really savoured every bit of it.” He recalls the brightly wrapped, square bar as “definitively adult and a bit special. But, being honest, also a bit strange.”

That was when Ritter Sport was imported by a German distributor – meaning Brits could pick up such flavours as Joghurt (Yoghurt), Knusperkeks (Butter Biscuit) and Pfefferminz (Peppermint). At that time, the brand had only just made its UK debut (it arrived on these shores in about 1980, having been founded in 1912 in Stuttgart).

Fast forward to 2014, and Daniels – already a veteran of fmcg sales – is hired to establish the Leeds office. He had recently left Ferrero, where he’d been grocery business unit controller.

“In a category where shoppers are notoriously disloyal, we command the same loyalty that we have ever had”

“A recruitment consultant rang me and said, ‘We’ve got this German chocolate business that wants to set up an affiliated business in the UK. Would you be interested?’ And I jumped at the chance.”

He did so from scratch. “There wasn’t an office; there wasn’t a warehouse; there wasn’t anything,” he says. That is, apart from the business model the board had in mind. “They wanted to retain the distributor for everything apart from the grocery multichannel,” Daniels explains. It took him 18 months to talk them out of that. Ritter UK now handles all its own business. And the names of its 50-or-so variants are in English.

“We’ve evolved significantly,” he says. And the brand is still evolving. UK revenue is expected this year to hit £20m, from about £2m in 2014. Weighted distribution is on track to exceed 40% in 2021 – “rarefied air indeed for block chocolate brands” – while household penetration is heading towards three million.

“I think it was in the low hundreds of thousands when we got the first data read from Nielsen back in 2015,” Daniels says. Plus, the brand has “grown a really successful business in Ireland”. Most positively of all, he stresses, the rate of purchase hasn’t fallen. “In a category where shoppers are notoriously disloyal, we command the same loyalty that we have ever had.”

Born: Nigeria. My parents were Voluntary Service Overseas members. We moved to Yorkshire when I was about nine

Best career decision: Being massively underprepared for an interview with Stuart Herd at McCain.  He tore me to pieces. When the dust settled he was actually incredibly supportive. He sent me a book, ‘Winning’ by Frank Dick, with a handwritten note telling me to refocus, believe in myself and go again

Worst career decision: Getting my work-life balance very wrong to the detriment of people I love.

Hobbies: I used to play rugby and run quite regularly. However, after rupturing my achilles for a third time, I now stick to the bike, with a real passion for road cycling

Such gains for Ritter, however, haven’t come without cost for Daniels. The start of the UK operation demanded “unbelievably hard work” he says. “It almost killed me the first three to four years. I got divorced partly because of working too much.” He’s since remarried, and credits coaching and the support of others in helping him cope.  He has relatively few to lean on at work, mind you, with just 11 colleagues in Leeds, about 10 more in Ritter’s Redditch depot and a team of five in Ireland. “We’re not a big business,” says Daniels. “We don’t have the significant budgets other people have. But what we do have is stonking category data. Our sales are highlighted by Nielsen as highly incremental.”

Growth has come via a distribution-led strategy, he explains. “When we took over from the distributor in 2014, we had listings in Waitrose, and that was about it. Since then, we’ve built distribution and presence across every channel in the UK and Ireland.”

He credits Ritter’s sustainability credentials for helping it gain space. The brand has used 100% sustainably certified cocoa since 2018. Key to the integrity of its supply chain is its ownership of a hazelnut farm in Provence and El Cacao in east Nicaragua – “one of, if not the, biggest cocoa plantations in the world”. Half the 2,500-hectare Central American site features more than two million cocoa trees, while the other half is protected. More than 550 people work there, earning “significantly above national averages” he says.

El Cacao currently provides 25% of Ritter UK’s cocoa. That’s likely to grow to about 50% over the next five years. Daniels won’t confirm exactly what lies ahead, but he hints at “big opportunities” in vegan chocolate and “maybe a premium range made exclusively with cocoa from El Cacao”.

That’s for the future, however. Right now, there are plenty of new endeavours to nurture. Like a DTC strategy. Ritter’s Choco Shop kicked off in April, followed by an Amazon store in August. Sales are “going unbelievably well, especially on Amazon”, Daniels says. So much so, in fact, that Sainsbury’s agreed to list the limited-edition White Chocolate, Mango & Passionfruit, and put it in a main fixture, on the back of online success.

Those online ventures were launched after Covid-19 had “a profound impact” on Ritter Sport’s channel mix. “Whilst some channels performed very strongly indeed – principally grocery mults– the impact of the lockdown was acute within impulse and forecourts,” Daniels says. “We also saw a significant acceleration within DTC and pivoted quickly.”

That quick response stands the business in good stead as it faces its next challenge: the clampdown on HFSS products. Ritter has sought to address health concerns with the February launch of a four-strong countline range with less than 100 calories per serving.

“We don’t have the significant budgets other people have. But what we do have is stonking category data”

It may appeal to health-conscious shoppers, but it will still be subject to the same restrictions on promotions and advertising, given that the HFSS rules don’t consider portions. The policy has left little wiggle room for confectioners. On this point, Daniels is circumspect.

Ritter may benefit from a potential exemption clause for firms with fewer than 250 employees. Even if not, the brand currently doesn’t “promote as aggressively” as some of its rivals, he points out – which could now work to its advantage. “That’s something that has been a little bit of an achilles heel. Our volume on-deal percentage as measured by Nielsen is only about 25% to 30% versus an average of 68%. Now we talk to retail partners, and we say that’s a core strength of ours.”

The rules haven’t dampened Ritter’s marketing ambitions, either. Next year, it plans to spend about £3m on it “with a focus on our sustainability and natural credentials” Daniels says. “We won’t ever have the biggest budgets, but we will have excellent credentials that stand up to modern consumers’ somewhat sceptical mindsets.” And in this environment, that could prove a winning quality.