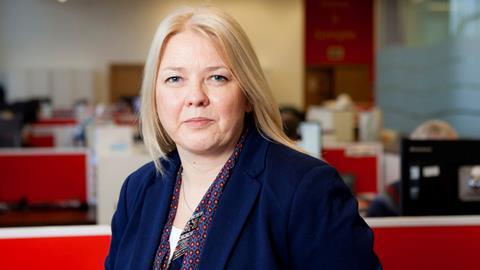 How Louise Stigant is guiding Mondelez UK to cut calories

Slashing calories is just one of the ways Mondelez is helping Brits to make healthier food choices, according to its MD

Grandparents can be a problem, warns Louise Stigant. No, the MD of Mondelez UK isn’t being ageist. She’s talking about their role in childhood obesity. While Mum and dad understand that moderation is key when it comes to kids’ treats, nan and gramps often don’t.

“Parents talk to us a lot about one of their big frustrations: grandparents being much more generous [with treats] and having that inability to say no,” Stigant says. “How do you as a parent have that conversation with your mother or father about helping make healthy decisions for your children?”

Issues such as this are, of course, front of mind for anyone in Mondelez right now. Education and awareness are just one “pillar” of the Cadbury owner’s expansive programme to help Brits make healthier food choices, says Stigant.

It’s been a long-running aim but, now that Covid-19 has arrived, that drive towards healthier choices is more salient than ever. Not only has the pandemic sparked new fears of obesity among locked-down Brits, who have been snacking more and moving less, but those habits pose fresh health risks. Research revealed in April suggested obese people were more likely to be hospitalised with Covid-19 than those with cancer or lung disease.

So last month was a particularly pertinent time for Mondelez to announce calorie reductions in more of its best-known chocolate brands for kids. Fudge, Curly Wurly, Chomp and Barny sponge bears will be brought under 100 calories “over the next few months”.

It’s the latest effort in its calorie cutting programme, which began by bringing Cadbury Mini Fingers and Cadbury Animals under the 100kcals cap last year. By the end of this year, Mondelez will have 11 brands that comply with that limit.

Stigant is clearly used to talking about these anti-obesity efforts, as evidenced by her long, apparently well-rehearsed sentences on the subject. For instance: “No more now than ever do we take seriously the need for us to play our role – alongside government, consumers and health professionals – to really take a stance on how we help our shoppers tackle obesity.”

Next on the agenda is cutting calories in Cadbury’s best-known chocolate brands beyond children’s favourites. Multipack versions of Dairy Milk, Twirl, Crunchie and 10 others will all be under 200kcals per bar by the end of 2021. The move, which is expected to remove 10 billion calories from the UK market, will be achieved largely by reducing the size of bars.

Perhaps controversially, rsps will remain static – but Stigant says there is a rationale behind that decision. “When you shave a very small amount of product out a bar, you don’t necessarily see a huge reduction in your cost base – and in lots of instances we have to invest heavily in our manufacturing capabilities, change lines, do all of those things in order to deliver taste,” she says. “If we lose that, we lose everything.”

That same principle applies to its recent reformulation efforts, all of which have sought to appeal to tastebuds as much as waistlines. Mondelez has added 30% Less Sugar variants of Cadbury Dairy Milk, Belvita and Wine Gums, cut the salt in Ritz crackers and launched Trebor’s first sugar-free hard-boiled candy.

A career in fmcg

That’s all happened since Stigant took over as managing director in June 2018. She assumed the role with a wealth of experience under her belt. Stigant began her fmcg career almost 30 years ago, joining Waitrose’s graduate scheme as part of its buying operation. In 1994 she moved to Kraft as category manager for desserts, managing brands such as Angel Delight, then went on to hold various leadership roles. Indeed, she was already a veteran of Kraft when the company spun off its snack food business.

Since Mondelez was created in 2011, Stigant has been in a host of roles that include heading up its Ireland operation and its Northern Europe meals business.

Two years ago, she replaced Mike Taylor as Mondelez UK MD at the Uxbridge office, taking on what she describes as “a dual role” that comprises leading the sales team and “a responsibility for the wider community within the UK business”.

Of course, one element of the role she could not have foreseen is managing the impact of coronavirus. For Stigant, it was the “really quick action” at the start of the outbreak that enabled Mondelez to continue with plans such as calorie-reduction efforts.

“What we’ve managed to do, with the support of our colleagues, is keep all factories running within the UK and Europe” – and that’s with “absolutely no comprise” on the health and safety of the more than 4,000 employees working there, she says. For Stigant, this is a source of pride, as the pandemic has “helped shine a light on the criticality of our food industry, whether that be those working in manufacturing, our logistics teams or our sales teams”.

But it would be wrong to say Mondelez has escaped the impact of Covid-19. The company’s recent performance has been “a bit of a mixed bag” due to changing consumer habits, says Stigant.

Locked-down Brits gifted less this Easter, which resulted in a 20% fall in value across the category, while the decline of on-the-go has hit Trebor and Belvita. On the plus side, Oreo and Cadbury Dairy Milk Fingers have done “very, very well”.

At a total level, Mondelez has largely “done well” – although it faces “headwinds on cost based on the requirement we were socially distancing correctly in our factories, that we were providing all the correct PPE, and those challenges from Easter”.

Other headwinds are fast approaching: a recession looms, likely exacerbated by the full impact of Brexit. “While we’re all pretty confident a recession will happen, the answer we don’t know is how deep and long. As we model and scenario-plan, that’s one of our considerations,” Stigant says.

She plays her cards close to her chest on what those plans might involve. No details are given, just by-the-numbers pledges to “put our focus and attention in the right places”, “look at our cost base” and “protect the future of the business”.

Though she goes on to drop a couple of tantalising hints. There’s likely to be greater focus ahead for Mondelez on e-commerce, while plans for premium NPD have recently been put on hold in anticipation of lower consumer confidence. “That adage of ‘prepare for the worst and hope for the best’ is definitely our planning stance,” says Stigant.

This applies to Brexit, too – on which she gives a similarly cautious response. “We hope hard Brexit isn’t the outcome, obviously, but we’re working really hard to minimise disruption, to make sure we can ease the flow of goods, look at how we manage customs, and how we respond at our different sites,” she says.

The aim is “to put ourselves in a strong position as we head towards Brexit” Stigant adds. “But it’s a bit of crystal ball-gazing at this time.”