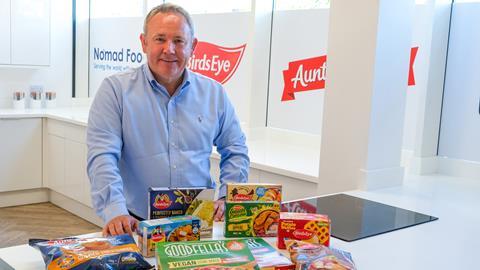 Big interview: How Nomad’s Wayne Hudson is bringing energy to the frozen aisles

Nomad’s UK MD is adamant the frozen boom will outlast the pandemic – through a mix of quality, savvy marketing and fishless fingers

You’d expect Wayne Hudson to be tired. The past year has been a whirlwind for anyone in frozen – and the MD of the UK, Ireland and Nordic divisions of Nomad Foods knows that more than most.

Nomad’s flagship Birds Eye brand saw a 20% increase in UK sales last year, says Hudson, as shoppers raided the freezers. At the same time, the business has “launched a number of new products”, most recently including Birds Eye ‘fishless fingers’.

On a group level, Nomad has been on an acquisition spree – having swooped for frozen business Fortenova and Findus Switzerland since the year began.

So now could be an opportune time to pause and reflect. But Hudson is visibly full of energy, and determined to keep momentum going. There are still “lots more exciting things to come”, he insists.

Hudson is particularly keen to refute the idea that the boom in frozen is a flash in the pan – something that has been mooted with the latest 14.9% decline in frozen food sales [Nielsen 4 w/e 22 May 2021].

However, that is against some tough comparables. Last year, Brits were reeling from the impact of the first lockdown. Hudson is keen to look at longer-term trends. “The quality perception of frozen has been changing for a number of years,” he stresses.

That’s primarily down to the overhaul of Birds Eye that began under Hudson in 2016. “I don’t say this in an arrogant way, but Birds Eye is by far the largest brand in frozen and pre-2016 had been declining. And if the main brand isn’t investing, then it’s logical the category would underperform.”

Its comeback story has been well documented. After falling under private equity ownership, “the quality of the products for the prices the business was trying to charge wasn’t value for money any more”, admits Hudson. Since taking over, Nomad has worked to turn that around with investment in quality, NPD and marketing. On the latter front, it moved away from its old ‘masterbrand’ strategy towards division-specific executions such as the suave new iteration of the Captain.

Birds Eye is now at a high point. Shopper penetration stood at around 70% in the UK back in 2016, and today has reached “over 90%”, says Hudson. He points out the brand grew faster than the wider frozen category in the pandemic, attracting around 500,000 extra shoppers in total. He’s realistic enough to accept not all of these will stay. “We set ourselves a target of retaining 33% of those new consumers and users and actually we’re at circa 40%,” he says. “So the strategy is working. We’ve developed that to really entrench ourselves in taking advantage of future growth.”

That strategy is essentially a continuation of what began in 2016. Hudson repeatedly stresses the commitment to quality. In short, it will never go back to the private equity days of stripping everything to its bare minimum. “We’re continually reinvesting in making sure products are great quality and value,” he says.

Innovation is another key tenet of its plans. On this front, there has been an important new development since 2016: the plant-based boom. It’s an area where Nomad is trying to develop a stronghold primarily through its Green Cuisine brand, as evidenced by its latest NPD efforts. Its chicken-free dippers made their debut last August, followed by chicken-free grills and burgers in May and its fishless fingers this month.

Growth has been exponential. Last year, Green Cuisine more than quadrupled its value in the UK to £11.3m [Nielsen 52 w/e 5 September 2021]. Hudson says that figure has now passed the £16m mark. “Green Cuisine has been a great success over the past 18 months,” he says. “We’ve already achieved just over 8% of market share in plant-based frozen.”

As the brand rolls out to other markets, Nomad has some bold ambitions for its global value. “We’ve publicly said for Green Cuisine, we want to reach £100m very quickly,” says Hudson. And he confirms there is plenty of further NPD in the pipeline, though he is tight-lipped on what that might involve. “I don’t want to give our competitors too many ideas!”

Family: Married to Vicky with a daughter, Ashley and a Lhaso Apso, Milo

Hobbies: Sharing good food and wine with family and friends

Best book: I do like biographies. I’m currently laughing out loud, reading ‘What a Flanker’ by James Haskell, the ex-England and British Lions rugby player

Favourite movie: I’m not much of a film fan and prefer listening to music

Favourite album: I love all kinds of music so a tough choice. If I was forced to pick one, probably ‘Legend’ by Bob Marley and the Wailers

Favourite frozen product: Has to be Birds Eye Garden Peas

Green Cuisine is also front and centre of the final pillar of Nomad’s strategy: marketing. A high-profile tie-up with Team GB beckons for the Tokyo Olympics, which will see packs sport a new union flag look from July. There will also be a tag added to its TV adverts, among other elements.

“We have really exciting plans for in-store execution,” Hudson reveals. “It’s something we’re really interested in doing to provide some disruption at the point of purchase.”

If Nomad wants to promote its Green Cuisine range as a healthy option, it could hardly do better than the Olympics. It seems an ideal time to create such associations, considering the pandemic has pushed health to front of mind. Hudson himself is not sure it has resulted in an actual change to consumer habits yet.

“I think it’s too early to say has it changed people’s views on eating healthier,” he says. “But I think with everything that went around, like panic-buying in the early stages and changes to how people shopped, it’s made people think about what are they doing.”

And he’s certainly aware that health is on the government’s agenda, as Nomad looks ahead to the introduction of the obesity measures outlined by Boris Johnson. For now, the industry is still waiting to hear exactly what will fall within the scope of the ban on promotions and advertising restrictions on high fat, salt and sugar products, due to come into force next year. Despite the tight turnaround, Hudson is pretty calm about the prospect. “I think in Birds Eye alone, around about 90% of our portfolio will be classified as a healthier choice so we have lots of options to drive our business forward,” he says. “At a category-specific level, we may have to do different things, but holistically it’s not something that keeps us awake at night.”

Meanwhile, brands that are more vulnerable to the restrictions – like Goodfella’s pizza – are changing. “We’ve done a lot of work actually on the pizza portfolio over the past two years,” Hudson says. “So from a nutritional profiling point of view, it’s a lot better placed than when we bought it.”

All of which makes Hudson confident Nomad can thrive post-pandemic. A crucial factor in its success during Covid – the rise of at-home meals – is unlikely to go anywhere as more people work from home, he adds.

So for Nomad, the job is making sure it is present in those occasions. And if anyone has the energy to make that happen, it’s Hudson.