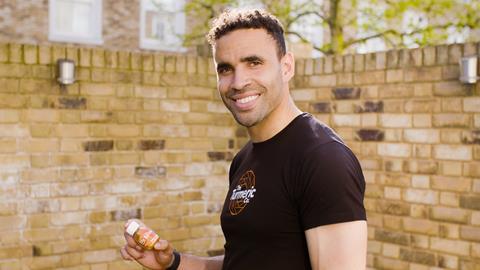 Thomas Hal Robson-Kanu never imagined a turmeric shot would become mainstream. “A decade ago, if I saw a turmeric shot on the shelf, I personally would have liked it but I’m sure 100,000 other customers wouldn’t have,” admits the footballer and founder of The Turmeric Co with a smile.

Today, the appeal seems to have gone well beyond Robson-Kanu’s personal preferences. Having seen a 600% uptick in sales during the pandemic, the brand is on track to turn over £12m this year. It produces over 400,000 shots a month.

“Our subscriber growth is almost scary,” says Robson-Kanu. And that’s not just from the professional sports outfits in its subscriber base, such as his former football team West Bromwich Albion and the Team GB gymnastics outfit. There’s plenty of public interest, too. “If you break down the demographic of our subscribers, the majority are male and female aged 35 to 45-plus, so it’s not the elite athletes. It’s so fascinating to see.”

In many ways, The Turmeric Co is in the right place at the right time. It primarily plays in the DTC channel, which experienced huge growth during the pandemic, as did anything with health credentials.

But Robson-Kanu believes something deeper is going on that could shift consumer habits in the long term. “We’re part of a really important trend, I think, that will affect a generation. People are more open to natural nutrition and are turning to natural products.”

Robson-Kanu is clearly passionate about his product. Considering his back story, it’s easy to understand why. Turmeric proved a lifeline in his early football career, when he suffered a devastating knee injury. “The surgeon said I would probably never play without pain or restriction,” he recalls. 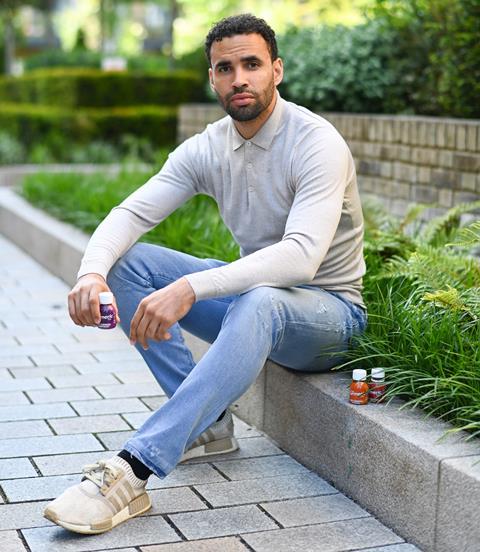 That “really traumatic time” ended up marking a turning point in his career. It was only through experiencing the side effects from anti-inflammatory drugs – he was taking them “like Smarties” – that Robson-Kanu and his family were forced to look into the powers of turmeric. “We did a massive amount of research into Ayurvedic medicine, Eastern natural medicine and all of these alternative treatments for health,” he remembers. “Certain ingredients kept coming up, and it was the likes of pineapple, pomegranate, watermelon, ginger and turmeric.”

So Robson-Kanu’s dad blended up a mix of the above into a course of shots to be taken on a daily basis. After six weeks, the young footballer had a “lightbulb moment” in his recovery. “I went into the shower and realised it was the first time in two-and-a-half years I had woken up without pain in my knee,” he says.

These shots soon became a “secret weapon” in his football career, which famously included a standout goal for Wales in the Euro 2016 tournament. “I began to realise I would recover quicker than my team mates,” he recalls. From there, it snowballed. “My team mates began using them, then family and friends.”

The feedback was “phenomenal” and eventually, demand became high enough to turn it from a sideline into a solid business proposition. In 2018, The Turmeric Co was born. Online subscriptions quickly began to take off and, in early 2019, the brand secured listings in Whole Foods Market and Planet Organic.

It may sound like an overnight success, but it hasn’t all been smooth sailing. For starters, Robson-Kanu had his work cut out in making turmeric shots accessible. He remembers the first time he spotted a range on the shelf in Harrods, before The Turmeric Co was founded. “I was blown away,” he says. “So as a young footballer, I bought the whole shelf.

“I took them home to my family, we were all really excited, opened the bottle together, went to drink it and literally had to spit it out,” he laughs.

Determined that The Turmeric Co’s shots would avoid provoking the same reaction, he worked hard on their taste and quality. But that didn’t come cheap. The shots initially retailed at £3.70 each. “The challenge we had in bringing them to market was that the price point was so high,” Robson-Kanu admits.

Career: Pro footballer and founder of the Turmeric Co.

Career highlight: Euro 2016 goal in the Wales vs Belgium match

Best business advice been given: Your team is everything!

Favourite film: Armageddon! A classic! For me this was a strong message about putting others before you. In this instance that actually meant saving the world, as with all good blockbusters.

Death row meal: Tuna and sweetcorn toastie – that was the first thing I could make as a kid.

Luckily, health-conscious consumers were willing to pay the premium, which enabled the business to make some economies of scale. A shot now retails at £2.29 individually, or £1.99 as part of a month’s supply.“We’re now ordering tonnes of organic turmeric on a weekly basis, and tens of tonnes of watermelon. So we can get these fresh, high-quality ingredients at a cheaper price. And we’ve passed those savings on to our customers.”

Of course, those soaring volumes been a challenge as well as a blessing. When the pandemic hit, orders went through the roof, in what Robson-Kanu remembers as a “strange and demanding period”. Suddenly, its production facilities and supply chain had to cope with far more demand than expected.

“It was insane,” he says. “But actually that allowed us to get some extremely robust operating processes and procedures in place, which we’re ultimately now we’re reaping the rewards of. It’s helped us expand and grow and really tested us to the brim.” Plus, the team grew from 11 to 45 people, who all remain in place today.

As all of this suggests, growth is now the focus for the business. Robson-Kanu hints at some upcoming NPD that could depart from the shot format, using my own “personal experience in nutrition”. He’s also keen to get the word out further through marketing. 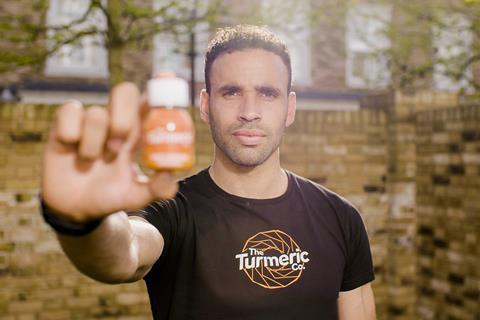 The latter has proven a thorny issue for The Turmeric Co, which was rapped by the ASA in July for making claims regarding inflammation, joint and gut health. It’s arguably hard to market the product without referencing the benefits.

But Robson-Kanu is keen to stress the ASA plays an “important role” and now wants to focus on customer feedback as a marketing tool. “It’s about the people using [the shots] first-hand and letting them tell the story,” he says. “Let them be our spokespeople.”

With that, he lays out some big ambitions for his brand. “We want to affect tens of millions, hundreds of millions of people through what we do,” says Robson-Kanu. Considering just how powerful his “secret weapon” of turmeric shots have proven so far, that just might be an achievable goal.