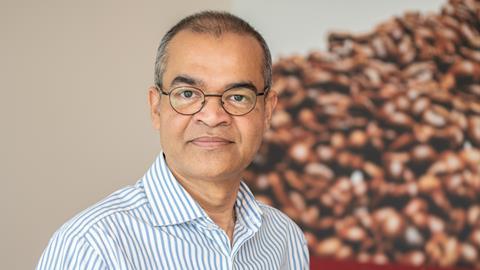 Mushtaque Ahmed: how JJs used tech to become a force in foodservice

How did the ‘Kebab Boys’ become a force in foodservice? And why has the business prospered during the pandemic?

The government’s hammer-blow decision to shutter the hospitality industry overnight on 23 March sent shockwaves through the foodservice industry.

Many wholesalers operating in this space saw 95% of their trade vanish. Swathes of employees were furloughed, with businesses running on skeleton staff in order to keep to their public sector contractual obligations. Many are now teetering on the brink of redundancy.

It was widely accepted this would be the time not to make hay, but to survive.

The family-run business saw its weekly turnover return to its pre-lockdown figure of £4.2m by May. It furloughed just 15 of its 800 staff, all of whom have now returned. And it made its hastily set up direct-to-consumer business a permanent fixture following its stand-out success.

So how have the self-professed ‘Kebab Boys’ become the ones to watch in the increasingly competitive foodservice space?

COO Mushtaque Ahmed has worked for the business since 1997.

“We are a tech company selling food, a problem-solving company,” Ahmed explains. “There is no time to stand idle. We have grown between 10% and 15% year on year since Kiamil set up the first depot in Hornsey. We now turnover £200m a year, have 11 depots, 800 employees and 80,000 customers.”

Mustafa Kiamil founded JJ Foodservice in 1988 after struggling to source products for his then chain of fast food restaurants, Jenny’s Burgers, which was subsequently sold as the wholesale operation began to take off.

It was nine years later that Kiamil invited Ahmed, his favourite waiter from his local Indian restaurant, to an interview one Saturday morning at the Hornsey site.

“It was the day after I had sat the last exam for my business systems and design masters,” he says. “Kiamil asked me what I was going to do next. When I told him I had no idea he invited me into his office for an interview the following morning.” This was in fact his second masters, his first was in electrical engineering.

Dressed in a t-shirt and jeans, the post-graduate from Bangladesh walked into JJs and started his career as an admin clerk.

“I was a jack of all trades back in those days – and master of none,” he says. “It was a close family business and to fit in you needed to become part of that family. It is only then that you begin to see your role as a 24/7 commitment and not a challenge.”

In 2000 JJs had built up enough business to warrant bigger premises and moved to a six-acre site in Enfield, where it built a 60,000 sq ft warehouse and HQ within six months.

“I remember thinking ‘this is a monster, how are we going to fill it?’,” Ahmed says. “But within two-and-a-half years the warehouse was chock-a-block.”

Kiamil had stuck to supplying what he knew best, quick service, specialising in ethnic takeaways and restaurants, with particular focus on his heritage, the Turkish market.

“We were known as the kebab boys back then. We had that reputation and were serving that market well. But we were cornered into one market and needed to increase our product range.”

Its Tottenham depot, opened in 2001, allowed for that expansion. It introduced a bakery range to serve sandwich and coffee shops in the West End.

It also hired sales experts to allow for diversification into the education, care home and pub sectors.

“It’s taken us 20 years to be known as a true foodservice company, with a full product range serving a wide spectrum of private and public sector customers.”

As Ahmed progressed through the company his technical background strongly influenced JJs’ continuous investment in technology to solve logistical problems and boost turnover.

“We recognised we had a big problem to solve with our delivery drivers,” he says. “Drivers were having a real problem with traffic wardens. Operating in the city there were lots of parking tickets being issued. The drivers also didn’t like handling cash. It took time to count, and to spot fake notes. All in all, these things were really slowing them down.”

Ahmed’s solution was to use the website to drive a cashless operation and create an app. One of its features sends push notifications to the customer, warning them to prepare for the delivery when they are 10 minutes away, so the delivery is met and the driver avoids parking tickets.

“Our customers were not tech-savvy so this took passion and a real belief to convince them that this was the right way forward,” says Ahmed.

“We offered deals and money off for ordering online. We offered such big discounts in the early days of doing this that customers were using the money they saved from their first online order to purchase a laptop to make life easier for themselves.”

Online cashless orders accounted for 86% of total sales for the week ending 18 September, up from 54% for the same period in 2018.

It’s clear from Ahmed that value remains at the core of JJs’ ethos. It chose to continue running its promotions programme even when the coronavirus pandemic struck.

“The crisis forced us to show our worth; increasing prices would have been greedy. The market was oversupplied before the pandemic, so it was our chance to use the versatile business model to our advantage.”

That versatile business model meant that within eight hours of the prime minister committing the country to lockdown, Ahmed and his team had set up a fully functional direct-to-consumer offer.

“We are hands-on, practical people,” he says. “We don’t wait around for a miracle here. We had the tech there already. We had the coding on the website and the app had the features for a consumer business. We had built it all with a view of saving it for another day.”

JJ Home is now a permanent fixture, having earned its place in the portfolio after attracting 30,000 new customers and boosting weekly turnover by approximately £550k – 14% of total sales.

The product range has grown from an initial 150 products to 500, with plans to double it before the end of the year.

“Always invest well before the want becomes a need”

“It’s a lovely complementary sector for us, but it’s never going to be the main source of revenue,” he admits. “We are finding that our customers using this service are splitting their basket between us and their regular supermarket.

So what’s next for JJs?

“We will keep investing in tech. We are currently upgrading the entire back office system, our biggest project to date. Did we need to do it now? No. But we aren’t ones to sit around idle. Always invest well before the want becomes a need.”

Kiamil and Ahmed are still actively looking for new locations to expand into, with the hope of securing up to five more sites, while plans are underway to expand into Indian, Chinese and Mexican ranges.

He says the business remains wary of the second wave of the pandemic.

“We will set our expectations close to reality. But people have to eat. Whatever happens to the economy, people always have to eat.”