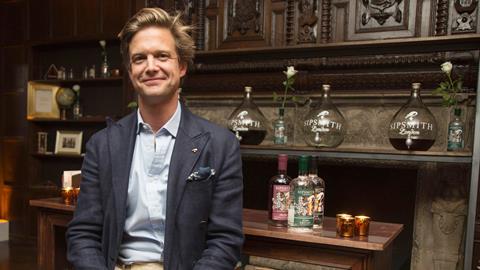 Sam Galsworthy: after the gin boom, what's next for Sipsmith?

Sipsmith played a key role in the gin boom. So what does its co-founder think is next for the brand – and the spirits category?

Craft booze brands - mentioning no names - love to think of themselves as revolutionaries. But how many can say they genuinely paved the way for a total upheaval of something as massive and historic as gin? Sipsmith can.

The London-based brand turns 11 this year, and can legitimately lay claim to having changed the game and sparked the gin boom. It was, after all, relentless lobbying from Sipsmith’s trio of founders - Sam Galsworthy, Fairfax Hall and Jared Brown - which played a key role in convincing the taxman to relax laws on opening small distilleries in the UK, netting the brand the first small-scale distilling licence in London in some 200 years, and paving the way for a legion of copycats.

One decade, one high-profile sale to Beam Suntory and an ocean of gin later, and Sipsmith is without a doubt one of Britain’s most recognisable gin brands, and is steadily growing its global footprint. But the world of spirits has changed.

The consensus is we have passed peak gin: although the category is still in growth, big brands like Gordon’s and crucially Fever-Tree, whose rise was intrinsically linked to that of gin, have been hit by their first declines in many years.

And with more and more competitors, even these pioneers of the craft gin movement aren’t invulnerable. So are they worried? And what’s next?

“The tide is probably not moving at the same pace as it was, but there’s still a bit of stretch,” says Galsworthy. “Fever-Tree is not a bad market indicator for the category, but it’s certainly not the only one.”

There are still some “spectacularly good-quality gins out there”, he stresses, “but there are some that are creating confusion and it will be up to consumers as to whether or not they stand the test of time.

“You will see natural fallout and I think some of that might be surprising.”

Galsworthy certainly isn’t a fan of some competitors. “You’ve got gins now celebrating the fact their flavour profile was created by artificial intelligence. That for us is completely counter. It loses any element of soul. This shouldn’t just be about releasing a product. It’s about look, feel and soul.”

The best business advice I’ve ever been given: Never, ever compromise on the people you recruit

Worst decision: Using plastic piping when we emptied our pot still with boiling water. The plumbing swelled and burst

The last great book I read: Doughnut Economics by Kate Raworth. It’s an absolute must-read about the circular economy and an economic model beyond capitalism

Death row meal: A monkfish curry with a martini

One thing’s for sure, though: much of the remaining ‘stretch’ in the category Galsworthy talks about will come from new flavours, rather than upmarket dry gins. “These are what are appealing to next-generation drinkers,” he admits.

But despite the success of its extensions, the brand isn’t about to start smashing out a new flavour every month, Galsworthy stresses. “There is more sophistication in what we’ve done. The cutting room floor of our distiller’s lab is full of stuff we’ve rejected.”

He’s equally nonplussed about the growing hype around rum. “There’s a chance it might take a jewel or two out of gin’s crown in the next five to 10 years but it will never earn the right to wear the crown outright.

“Gin has universal appeal. From the ultra-premium down to standard, this will never be the same. Don’t get me wrong, I love rum and I consume it heartily, but its occasions are more limited.”

And crucially, it lacks transparency. “There is a mystery around rum and some people don’t want it demystified. Distilleries aren’t accessible.”

Galsworthy is far more interested in low and no-alcohol drinks - spirits in particular. “The market is the most effervescent at the moment. There’s a handful that are absolutely sensational.”

He’s tight-lipped when asked if this means Sipsmith 0% could be on the cards, but he admits “we have an eye on every single innovation opportunity”. “We’ve looked at how that category works, and what you need to do to play in it, and it is really exciting.”

Sipsmith is also focused on working sustainability into its operations in a more meaningful way: Galsworthy says the brand is pursuing B Corp certification in a category that often “lags behind” other parts of fmcg when it comes to sustainability. “We’re not far away. It goes so much further than packaging, to team, engagement, sourcing, supplying as well. We are being ruthless about it.”

In any case, sales of Sipsmith over the crucial 12 weeks to 4 January surged 43% [Nielsen] - a solid reminder of just how powerful this brand still is.

All of which puts it in solid stead for another 10 years. Even if the gin boom does eventually peter out.