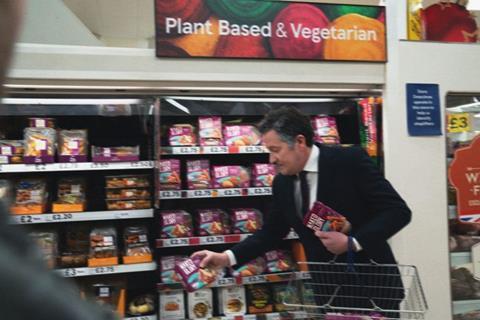 Tiresome loudmouth Piers Morgan was predictably full of outrage as Greggs launched its vegan steak bake at the start of the month.

On Good Morning Britain, the TV presenter labelled the product a “con”, going on to ramble about meat terminology, almond production and, er, how French people are good looking. Greggs boss Roger Whiteside made sure to thank him for the publicity at this year’s Oxford Farming Conference.

So is Morgan secretly in bed with the vegans, working as a reverse-psychological plant-based shill? Apparently covert snaps of him browsing the meat-free section at his local Tesco seem to suggest so.

Of course, it’s not him – rather a (more handsome) lookalike, photographed by artist Alison Jackson, who has made her name with such doppelgänger-based trickery.

Plant-based brand Naked Glory, which staged the slightly confusing stunt, reckons its range is so meaty it could tempt even the snowflake king himself: “You simply won’t be able to resist cheating on meat this Veganuary,” it said. “Even if you’re Piers Morgan.”