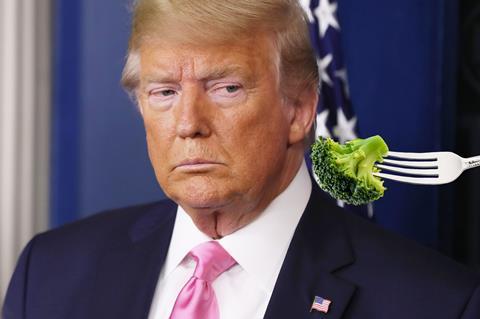 Sad! Donald Trump gets set to go nuclear over dinner

You know that trick of ‘hiding’ vegetables in other foods so you can get toddlers to eat them? There’s nothing Bogof Jr enjoys more than ‘tomato’ pasta sauce made with blended-up red peppers, artichokes and celeriac, for example.

Well, apparently the trick’s not just for tots. Former White House physician Dr Ronny Jackson last week gave an interview to the New York Times in which he claimed he sneaked veggies into fast food-loving President Trump’s diet by “putting cauliflower into the mashed potatoes”.

“We were making the ice cream less accessible,” he added.

Wonder if it works on British politicians? There must be a way to curb Jacob Rees-Mogg’s insatiable crisps habit.