Grayling call for UK to grow more is 'tripe' 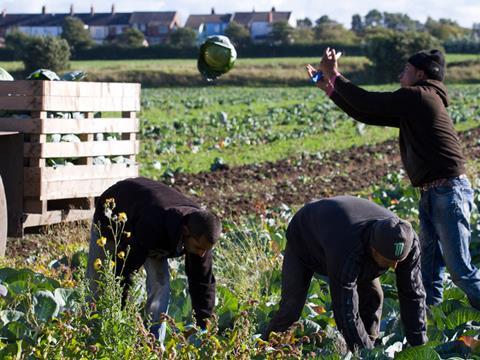 Transport secretary Chris Grayling’s intervention into the Brexit labour debate has been slammed by farmers’ groups after he suggested the UK could grow more produce in the event of a hard Brexit.

Speaking on the BBC’s The Andrew Marr Show on 15 October, Grayling suggested the UK would respond by “growing more here and buying more from around the world” if it left the EU without a trade deal.

But his comments were described as “absolute and utter tripe” by British Summer Fruits chairman Laurence Olins, and “indicative of the un-coordinated way the government is approaching Brexit”. the trade body’s members were “unable to find labour this year, never mind post-Brexit” Olins added.

British Growers’ Association CEO Jack Ward described the minister’s comments as “incredibly simplistic”, adding that food costs would inevitably rise if more produce were imported from further afield. “And if we don’t have an agreement on seasonal labour and access to EU workers, we won’t be about to produce our way out of trouble.”

Ward’s comments were echoed by NFU director of EU exit Nick von Westenholz, who warned a failure to secure a comprehensive trade deal would cause “considerable disruption to farming in the UK”, particularly on the issue of carcase balance. “Simply upping production to quickly offset any reduction in food imports isn’t feasible,” he added.

It comes as new Dairy UK chairman Paul Vernon this week warned that a failure to negotiate a trade deal with the EU could have “far- reaching consequences”, for the UK dairy sector. Meanwhile, a University of Sussex report on 17 October warned a ‘no deal’ scenario could mean millions of households facing food price rises of over £500 a year.

However, the government maintained this week that there was no Brexit-related crisis in the food sector, particularly on the topic of retaining and attracting labour.

In a written response to the Commons Efra Committee’s Feeding the nation: labour constraints report – published in April – the government said it did recognise the agriculture and horticulture sectors’ concerns about access to a “sufficient and appropriately skilled workforce as we leave the EU”.

But it added that it did not share the Efra Committee’s suggestion that the current situation was “in danger of becoming a crisis if urgent measures are not taken to fill the gaps in labour supply”.

The government insisted until the UK left the EU, it would retain all membership rights, while food companies were free to continue recruiting EU workers to meet their labour needs, and “although this was a challenging situation, it was not a crisis,” the response document said.

“We understand that providing certainty to workers, business and the community is crucial. The government has made it clear that it wants to ensure that EU citizens in the UK before a specific date can continue to live here as they do now, with access to education, healthcare, benefits and pensions,” it added.

“It is in no one’s interest for there to be a cliff-edge as we leave the EU.”