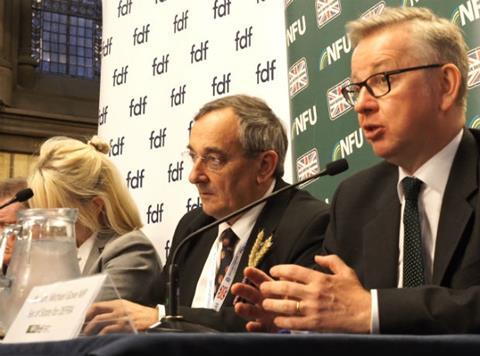 Over the past two weeks, I have chaired food and farming debates at both Labour and Conservative fringes for the NFU and FDF. As the Tory conference draws to a close, here are my key impressions from Brighton and Manchester.

1. Labour is being taken seriously again…

The experience at this year’s Labour fringe was a world apart from last year’s debate in Liverpool. The key difference? A real sense that Corbyn’s Labour could find itself in power – a prospect many would have dismissed as laughable 12 months ago. Cue standing room only at the Labour debate in Brighton and a marked uptick in engagement and interest from industry in what the shadow Defra team has to say on food and farming issues.

The delegates, too, appeared more business-focused than would have been the case in previous years, with questions about supply chain relationships and the practicalities of Brexit trumping the badger cull, pesticides or animal welfare issues.

“It’s hard to dislike her” was the verdict on Defra shadow secretary Sue Hayman, who proved a game panellist during the debate in Brighton. She certainly made all the right noises about wanting to engage with the food and farming sectors – “I want to hear from you, I want to listen to what you need and what you have to say” – but tangible policy positions were hard to come by. Labour seems to be stuck in perpetual consultation mode, asking for others’ opinions while refusing to show its cards on issues like the single market and freedom of movement.

The problem, as the FDF’s Ian Wright put it, is that time is not on its side. The Brexit clock is ticking; the country needs an effective opposition with clear positions on core Brexit issues now – not several months down the line. “You may well find yourself in government,” Wright told Labour delegates to nervous laughter in the room. “Sue, you could well be secretary of state, and you will need to have answers to these questions or we will all find ourselves in deep doo-doo.”

I’ve been chairing these fringe debates for five years, and there was always at least one badger question. Not this year. Not a single audience member asked about the badger cull. Not at Labour, not at the Conservatives – despite a recent extension to cull zones. Instead, Brexit and the practical challenges arising from our exit from the European Union dominated proceedings, with questions around the workforce and seasonal labour featuring particularly prominently.

Defra secretary Michael Gove stressed EU citizens had been given a government pledge that they’ll be able to stay post-Brexit, and he told another fringe meeting he could see a case for “looking at a seasonal agriculture workers scheme that allows people – whether they are from EU nations or indeed beyond – to come here for a limited period in order to augment the existing workforce”.

However, whether Gove will be able to get his other Cabinet colleagues and the wider Conservative party to buy into the idea remains to be seen – as evidenced by the return of the perennial ‘young people should be made to pick fruit’ argument soon after Gove made his comments.

4. The environment trumps food and exports

The Tories have long pushed the idea of ‘green conservativism’ and talk of the countryside always features heavily in Tory conference speeches. But they really ramped up the green rhetoric in Manchester this year, with Gove’s backing of deposit return schemes just one example. Throughout, there was a notable shift away from food and trade towards the environment.

In his speech to the Tory conference on Monday, the Defra secretary mentioned the word ‘environment’ a staggering 18 times and ‘green’ eight times. Food, by contrast, got just three mentions.

The British countryside, Gove said, is “somewhere we call home or know as a haven of peace, somewhere enchanted by childhood memories of play, adventure and exploration”.

How is a vibrant, economically viable food production sector of scale going to feature in this enchanted childhood playground? Good question. Food and farming will clearly have to be very careful the business of producing food for this country is not made to play second fiddle to environmental stewardship.

Also conspicuous by their absence were exports – previously touted as a cure-all for the food industry’s woes. Gove mentioned exports just twice in his speech (one of those was “live animal exports”), and trade was rarely referenced in the food and farming panel discussion (though it did feature at other events). It’s clearly proving hard to push the idea of international trade while the future of our trading relationships remains shrouded in mystery…

Of course, it wasn’t just about the environment at the Tory conference. Gove did have some very nice things to say about food and farming in this country during the fringe debate. The standards are second to none. The quality is outstanding. Terrific work all round.

But one observation of his made my ears prick up: that the big opportunity for UK food and farming was at the “quality” end of the market. The recognition of the UK’s high production standards is welcome – but surely we need our food and farming sector to be viable and competitive across the board, if we are serious about raising our self-sufficiency levels post-Brexit?

Together with his comments about protecting the wonderful British countryside, it paints a picture of food and farming as worthy niche rather than vital manufacturing sector.

6. The fishing industry has Gove’s ear

Indeed, perhaps more so than food and farming. While food barely got a mention in Gove’s speech, fishing featured prominently.

Crucially, post-Brexit reforms were being framed as opportunities for fishermen (“outside the Common Fisheries Policy there is a sea of opportunity for British fishermen”) while reforms to agriculture policies and subsidies were portrayed as a means to rein in wayward farmers (“outside the Common Agriculture Policy, we can stop subsiding the rich on the basis of how much land they own and instead spend money on enhancing the environment”).

At the fringe debate, Gove made a point in his closing remarks of saying he recognised some delegates from the fisheries sector in the audience and was alive to their needs.

The fishing sector was, of course, very vocal during the Brexit debate, with groups such as Fishing for Leave gaining prominent political supporters. Food manufacturing and farming will no doubt want to make sure their sectors get an equal share of voice from here on in.

7. Public procurement is moving up the Defra agenda

Perhaps the most tangible positive takeaway from the Conservative conference: Gove is very clearly alive to the opportunity for government to ramp up its support of British food and farming post-Brexit by changing public procurement rules, citing food served in prisons as an example.

As the BPC’s Richard Griffiths writes in his Saturday Essay for us this week, hearing public procurement referenced by Gove during the fringe debate this week is a “wonderful acknowledgement”. He adds: “Public procurement will never sustain the British food industry on its own, but buying British sends out a message.”

8. The ‘buy British’ button is the hobby horse that refuses to die

Halfway through the Conservative fringe debate, an excited lady took to the mic to congratulate Gove on the wonderful work he’s been doing at Defra since becoming environment secretary. There was much to be praised. She even forgot to disclose her name in all the excitement. (The fact that, on pressing, she turned out to be Rebecca Pow, Conservative member for Taunton Deane and Defra parliamentary private secretary, of course in no way distracted from her heartfelt compliments.)

Pow’s main point, however, was that she wanted to sound out the panel about the merits of a ‘buy British’ button on supermarket websites. This idea has been floating around MP circles for some time and got a good amount of support from panel members at the fringe debate, seemingly unaffected by the fact that at least one retailer – Sainsbury’s – is already offering shoppers precisely such a “British” filter on its website.

9. Lanyards can be surprisingly controversial

The Conservatives managed to upset scores of farmers and health campaigners by accepting sponsorship from Tate & Lyle Sugars for their conference this year. Branded lanyards were ripped off in disgust. Pictures of Jeremy Hunt at a fringe debate on childhood obesity, the T&L lanyard around his neck, went viral. Tory MP Sarah Wollaston branded the move “tacky stuff”. One farmer tweeted: “Disgraceful #conservatives sponsored at conference by Tate & Lyle, who provide foreign cane sugar. So much for supporting British ag.” NFU vice president Guy Smith even resorted to blacking out the Tate & Lyle name with a marker pen.

10. The real action is happening off-stage

If there’s one overriding impression I took home with me from Manchester, it’s this: Gove is undoubtedly an upgrade to the Defra team – a slick, experienced political operator who came across as well briefed and earnest during the fringe debate, though (as with Labour) detail was sorely lacking.

But the real question on delegates’ minds was not about policy issues – they were wondering about how the Tory leadership struggle will affect them and how long Gove is likely to stick around for. Does food and farming have in Gove a supporter who’s interested in sticking the course? Or will he take the first opportunity to move on to a bigger, more high-profile department?

“He’s good but he’s not really that interested in food and farming” was a sentiment I heard expressed time and time again.

And with the Conservative party in turmoil, a foreign secretary intent on going off brief and Theresa May rocked by daily speculation about a possible leadership challenge, it’s not hard to imagine Gove being presented with an opportunity to move beyond Defra sooner rather than later.