Conservative Party manifesto: what it means for food & drink 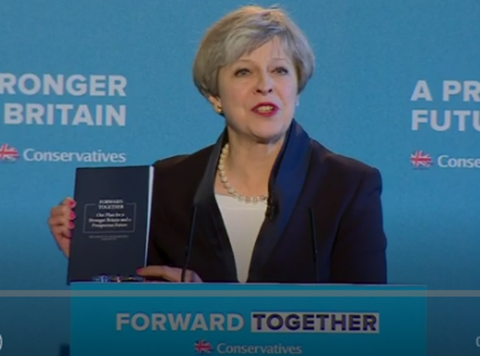 Theresa May launches the Conservative manifesto

The Conservatives published their election manifesto today. The document stresses the ‘strong leadership’ and stability of Theresa May as she leads the country towards Brexit. Here are the main highlights for the food and drink industry.

The Conservatives say they understand the reliance of certain sectors on high numbers of immigrants, but promise to make it more expensive to employ non-British workers in the future.

‘We will make the immigration system work for these sectors, whilst ensuring that we develop the skills we need for the future,’ says the manifesto.

The independent migration advisory committee will be tasked with making recommendations to the government about how the visa system can become be aligned with its modern industrial strategy.

’We envisage that the committee’s advice will allow us to set aside significant numbers of visas for workers in strategically important sectors, such as digital technology, without adding to net migration as a whole.

‘However, skilled immigration should not be a way for government or business to avoid their obligations to improve the skills of the British workforce. So we will double the Immigration Skills Charge levied on companies employing migrant workers, to £2,000 a year by the end of the parliament, using the revenue generated to invest in higher level skills training for workers in the UK.’

The manifesto speaks of the party’s ‘huge ambitions’ for the farming industry.

‘We are determined to grow more, sell more and export more great British food,’ it says. ‘We want to provide stability to farmers as we leave the EU and set up new frameworks for supporting food production and stewardship of the countryside.’

However, the Tories promise to grant a free vote on a government bill, in government time, to give parliament the opportunity to decide on whether to bring back fox hunting.

Claiming to be ‘the party of enterprise and of the entrepreneur’, the Tories promise to explore how the government can do more to support innovation by small firms and startups.

If they do not do so, they will lose the right to bid for government contracts.

The Tories say the modern industrial strategy has already begun to have an impact on advanced manufacturing, such as aero and automotive engineering, but add: ‘We want to replicate that success in other sectors.’

The Tories will force companies to make executive pay packages subject to yearly votes from shareholders.

‘Senior corporate pay has risen far faster than corporate performance, and the gap between those paid most and those paid least has grown,’ says the manifesto.

‘The next Conservative government will legislate to make executive pay packages subject to strict annual votes by shareholders and listed companies will have to publish the ratio of executive pay to broader UK workforce pay.’

The Tories promise a ‘full review’ of the business rates system, although not for the first time.

It says rates represent a ‘considerable challenge’ to some smaller companies, but defends the move to bail out smaller companies hit by the April revaluation as a sign it has been listening.

‘That is not all we will do,’ says the manifesto. ’We will make longer-term reforms to the system to address concerns about the way it currently works. We will make sure that revaluations are conducted more frequently to avoid large changes to the bills that businesses face, and explore the introduction of self-assessments in the valuation process.

’To ensure the system is sustainable for the future we will also conduct a full review of the business rates system to make sure it is up to date for a world in which people increasingly shop online.

The Tories are also promising to simplify the rates system.

‘A good tax system is not just about the headline rates of tax, however, but about its simplicity. Our system remains too complicated, making it hard for people - especially self-employed people and small businesses - to assess their taxes. We will therefore simplify the tax system.’

Corporation Tax, says the manifesto, will fall by 17% by 2020, making it the ‘lowest rate of any developed economy’.

‘We will stick to that plan, because it will help to bring huge investment and many thousands of jobs to the UK,’ says the manifesto.

The Tories says they will look at revamping front-of-pack labelling by exploiting the extra freedoms of quitting EU labelling restrictions.

It will also promote moves by companies to slash HFSS foods.

‘We will continue to take action to reduce childhood obesity,’ says the manifesto. ‘We will promote efforts to reduce unhealthy ingredients and provide clearer food information for consumers, as our decision to leave the European Union will give us greater flexibility over the presentation of information on packaged food.’

The Tories say they will deliver on the pledge to create three million apprenticeships for young people by 2020 but also drive up the quality of apprenticeships.