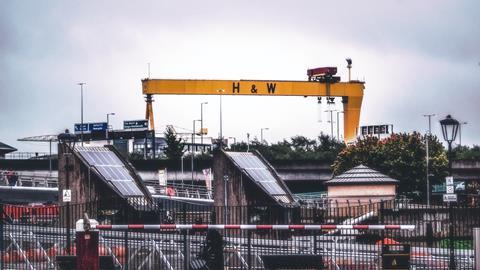 The EU has offered to cut the majority of checks on British food and drink moving into Northern Ireland, in the latest bid to resolve concerns over the Northern Ireland Protocol.

The proposals come in response to the UK’s demands for a radical rewrite of the protocol, agreed last year to prevent a return of a hard border on the island of Ireland.

The new plan would remove about 80% of checks and around half of all customs paperwork compared with if the protocol were implemented in full, the EU said.

EU officials said the measures would particularly benefit Northern Irish supermarkets that are transporting large, mixed consignments of food products from GB. These retailers will only need to file customs declarations once per month, it added.

Irish foreign minister Simon Coveney said it was a “major intervention” by Brussels to try and ease the tensions between the two sides.

The EU has moved to resolve many of the worst problems surrounding groupage, proposing that just one certificate will be needed for a mixed lorry heading across the Irish Sea. This would mean that a lorry containing potentially hundreds of product lines can travel with just a single certificate stating the items meet EU standards, rather than dozens as is currently required.

However this will not apply to certain meat and plant products, the EU said. It did not specify which ones.

SPS documentation will still have to be uploaded electronically prior to shipment, though there will be minimal physical checks upon arrival in Northern Ireland.

These measure would help create an “express lane” to facilitate faster movement of goods from Great Britain to Northern Ireland.

In return, however, the EU wants market surveillance information from both the UK government and British businesses to allow it to keep a better eye on goods flowing into the region. This will be a new burden for supermarkets, which will be required to provide full supply chain traceability and comprehensive product data.

It’s potentially good news for the British banger, however, as Northern Ireland will be exempt from the EU ban on the import of chilled meats, including sausages, from Great Britain. This is conditional on those products remaining aligned with EU standards.

Smaller businesses also look set to benefit from a widening of scope of an existing scheme to waive customs controls on “goods not at risk” of entering the Republic of Ireland.

The proposals were cautiously welcomed by Northern Irish trade groups. “If these proposals are to work then they must meet the tests that have been set out by the NI business community, namely that they must provide stability, certainty, simplicity and affordability,” said a spokesperson for the Northern Ireland Business Brexit Working Group.

“Some of the solutions being mooted go some way towards meeting those tests. However, we will reserve judgement until we have seen both legal and technical texts.”