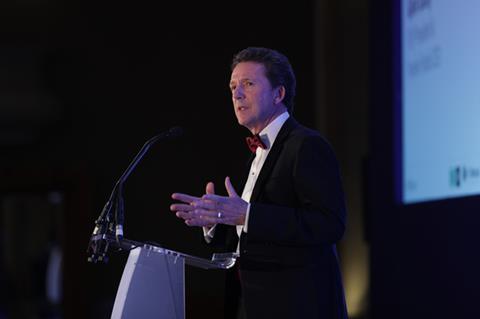 FDF president Gavin Darby has warned the industry it needs to speak with one voice over Brexit, or lose its power to influence vital decisions on what happens next.

The Premier Foods CEO said it was time for companies to stop complaining about the political uncertainty caused by the EU referendum and last week’s shock general election result.

Darby said the industry risked its views not being heard in the crucial negotiations in Europe and Westminster to come because of the increasingly fragmented nature of the industry and its interests.

Before the Brexit vote, an FDF poll of members found 70% were in favour of staying in the EU. But despite many regarding the decision to leave as an economic disaster, Darby said the focus now should be on finding a way to make Brexit work.

“Last week’s general election didn’t do anything other than reinforce levels of uncertainty,” Darby told guests at the FDF dinner in London last night.

He said Brexit was an “opportunity to take control of our destiny”, saying the industry needed to “spend less time demanding that others deliver more certainty and more time on managing the things that we can control.”

Darby added: “We should be less fixated on the principles of Brexit and more fixated on the terms and details,” he said. “What matters now is what works. As we enter negotiations maybe as soon as next week, it’s imperative we think about the big things that help us stand out. Let’s be seen by government as solutions-driven and not as problem-obsessed.”

Darby described the food and drink industry as a “genuine superpower” but said too often it failed to punch its weight because of too many disparate voices.

“Of course we are a very large and diverse industry but right now the government needs to hear a single voice and as loudly and clearly as possible.

“We desperately need to align our goals and be unified in our messaging. We cannot let anybody ignore us.”