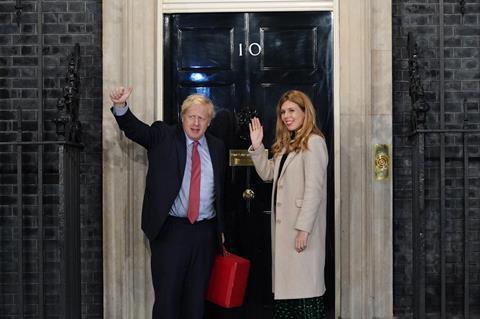 Food and drink industry leaders today urged prime minister Boris Johnson to bring an end to the “crippling uncertainty” which has left the sector on a knife-edge for the past three years, and deliver a Brexit deal which avoids a disastrous impact on trade with the EU.

The appeal came with the Conservatives having delivered a crushing victory after what the leading parties called the most important election in decades.

The Tories won 364 seats, giving them an overall Commons majority of 80.

But it was a disastrous night for Labour, which won just 203 seats with leader Jeremy Corbyn immediately announcing he will not lead the party into the next election.

The Liberal Democrat leader Jo Swinson lost her seat as the party saw its stance of seeking to revoke Brexit spectacularly backfire, claiming only 11 seats.

However, the result also saw a thumping victory for the SNP in Scotland, which increased its number of MPs to 48, a rise of 13, raising the prospect of another referendum to leave the UK.

In Northern Ireland, it was a terrible result for the DUP which saw the nationalists seize the balance of power, raising the prospect of renewed calls for a united Ireland.

The DUP, which had held the balance of power in parliament under Theresa May, even saw its Westminster leader Nigel Dodds lose his seat to Sinn Féin.

The results look likely to have huge implications for the food and drink industry.

Johnson, whose rallying cry was “get Brexit done” will return to the Commons promising to leave the EU by 31 January with the biggest Tory majority since the 1980s, paving the way for him to get his withdrawal deal through parliament after weeks of deadlock.

However, attention now turns to a new race against time as the prime minister seeks to secure a trade deal with Europe, having vowed there will be no backing down from the end of 2020 time frame for a transition period to quit the EU.

Food and drink leaders have warned the time frame risks making it “impossible” to achieve a deal with 27 countries, with the government having only until July to request an extension.

They have also raised fears of disastrous consequences and cost being heaped on the industry if the UK pushes for divergence from EU rules on areas such as food safety and labelling.

However, the prime minister, who as well as the trade deal has promised to ensure 80% of UK trade is covered by free trade agreements within the next three years, starting with the US, Australia, New Zealand and Japan, said this morning the election result had given him “a powerful new mandate to get Brexit done and unite the nation”.

Reacting to the result, FDF chief operating officer Tim Rycroft said: “We congratulate the prime minister and his government on the result of the general election.

“For too long, business has been mired in a sea of political uncertainty, hitting investment, productivity and long-term growth.

“As set out in our manifesto, we want to work in partnership with the government to reach our full potential as the most dynamic, sustainable, resilient and competitive industry, by boosting exports, developing talent and encouraging innovation.”

Outgoing FDF chairman, former Premier Foods boss Gavin Darby, said he hoped the new government would bring an end to the “paralysis” which has affected the industry during the deadlock over Brexit.

As well as the huge cost to industry of preparing for three different no-deal deadlines, he said any significant progress on huge issues such as obesity, the environment and the future of the Food and Drink Sector Council had been held back by the political stalemate.

“In my three-year tenure we’ve had no less than four secretaries of state for Defra,” said Darby.

“Along with the division over Brexit there has been a feeling of huge frustration across the industry and a sense that we need clarity so we can move forward from this paralysis.”

“Our manifesto is very short, starting with the need to prioritise the closest possible UK-EU trade and regulatory relationship.

“Brexit has got in the way of so many things. It’s taken up so much bandwidth. Hopefully now we can move on.”

British Retail Consortium chief executive Helen Dickinson said was ”vital over the coming days and weeks that the government commits to bringing clarity on the UK’s future relationship with the EU and pursues a fair deal for consumers that maintains tariff-free, frictionless trade with the EU”.

In his victory speech, Johnson said: “We will now at last be able to get Brexit done and put an end to all those miserable threats of a second referendum.”

Environment secretary Theresa Villiers, who held on to her seat in Chipping Barnet despite it being strongly targeted by Labour, said she was confident Johnson could defy the doubters and pull off the trade deal, despite industry scepticism.

“I’m optimistic we can do that,” she said. “After all, people said Boris couldn’t get a revised exit treaty and he did in a matter of weeks.

“A lot of work has gone into the deal already, as represented by the political declaration. That’s a good blueprint on which to start from. And this is a unique trade negotiation because all other trade negotiations start from a position of divergence whereas we start from a position of convergence with the EU rules. That means there is far less to negotiate than would normally be the case.

Her predecessor-turned-Brexit tsar Michael Gove described the election result as a “victory for the British people”.