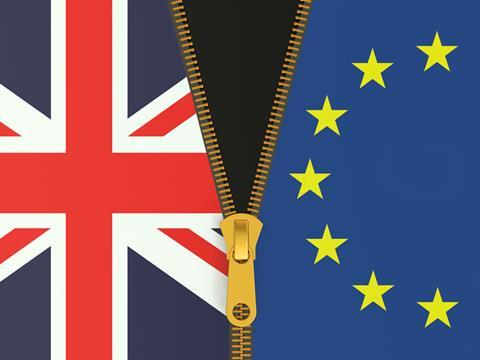 Food and drink industry leaders have welcomed the government’s proposals for an interim deal with the EU to stop trade with Europe “falling off a cliff” post-Brexit.

However, following today’s plans set out by the Department for Exiting the EU, trade bodies warned there remained huge obstacles to ensuring that the “freest and most frictionless possible” deal envisaged by ministers came to fruition.

The government said it hoped to negotiate an interim period with the EU, which could last until 2022, which could include a temporary customs union between the UK and the EU, much of it mirroring existing tariff and border arrangements.

Secretary of state for exiting the EU David Davis said the government was determined to avoid a “cliff edge for businesses and individuals on both sides.”

“An interim period would mean businesses only need to adjust once to the new regime and would allow for a smooth and orderly transition,” he said.

“The UK is the EU’s biggest trading partner so it is in the interest of both sides that we reach an agreement on our future relationship. The UK starts from a strong position and we are confident we can deliver a result that is good for business here in the UK and across the EU.”

Responding to the publication of the so-called future partnership paper, Helen Dickinson, chief executive of the BRC, said: “It is good that the government has started the discussion on future customs controls. Getting this right is essential to ensuring UK consumers are able to buy the products they want after Brexit.

“However, this is a complex issue, including safety checks as well as customs paperwork, and we need to develop a system that avoids disruption at our ports. We import more food than non-food from the EU and much of that is fresh, so delays would have a significant impact on supply chains. We want to work with government to develop a system that works for consumers.”

Ian Wright, director general of the FDF, added: “The UK government’s drive for greater clarity on the Brexit process is most welcome. The proposals for an interim customs regime, if they can be agreed, go some way in protecting business from a ‘cliff edge’.

“FDF’s priority is to ensure that our access to EU markets is not undermined during the transition period. Ensuring a single point of change would help minimise unnecessary disruption for businesses that have established trading relationships with the EU.

“The challenge will then follow in designing and negotiating a model that maintains these benefits beyond the transition period, delivering the same ease of trading that UK food and drink currently enjoys with the EU27, with zero tariffs and no new regulatory or other non-tariff barriers.”