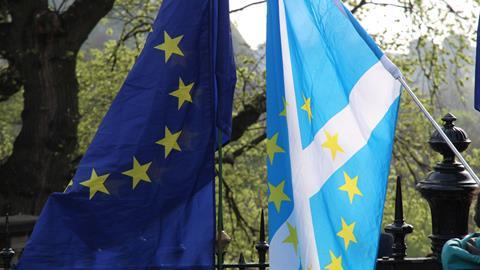 How a UK internal market could affect food and drink

The UK is jumping out of the European frying pan and into the domestic fire as far as single markets are concerned. The UK may no longer have to accept laws from Brussels come 1 January, but how the repatriated powers will be handled among the UK’s four nations is fast becoming a constitutional collision course.

Leaders of the devolved administrations have called proposals for a UK internal market a “power grab” that could see devolved powers return to Westminster and force Scotland and Wales to accept lower standards on food production and the environment.

It is an issue “absolutely dripping with politics” claims NFU Scotland. So what do the proposals mean for food and drink?

The issues surrounding the repatriation of power to British shores have rumbled on for almost three years. In October 2017, the UK and its devolved governments agreed to develop a series of ‘common frameworks’ to establish minimum or maximum standards for areas such as food production.

A political failure, however, to finalise any of the frameworks, prompted Downing Street to seek alternative means. In July, it launched a consultation on proposals to legislate for a UK internal market. Business secretary Alok Sharma claims this is necessary to ensure potential regulatory divergence does not create trade barriers within the UK, but the Scottish government firmly rejected the plans last week.

“The frameworks would be commonly agreed and that way everyone would get to say something,” says NFU Scotland president Andrew McCornick. “The way it’s now been presented, it feels like this is going to be imposed.”

The biggest concern is if future trade deals allow contentious products such as chlorinated chicken to enter the UK. With trade deals a reserved power of the UK government, there is seemingly no role for the devolved governments to approve new deals. The inclusion of a ‘mutual recognition’ clause in the new internal markets proposals means each nation would have to accept foods from other UK regions, regardless of any domestic legislation to the contrary.

“Without a solution, in the first period of time the impact is going to be pretty low,” says David Thomson, CEO of FDF Scotland. “It’s really about how legislation diverges in the four administrations of the UK over time. That’s where the potential impacts could be.”

Thomson is concerned England will have the leverage to “dictate all the terms” in the UK’s future regulatory approach. “There is the potential for it to have more effect on businesses in Scotland and Wales because most companies of any size see the rest of the UK, so fundamentally England, as the dominant market for them,” he says.

Northern Ireland will continue to follow EU’s rules and therefore will be less affected by the proposals.

But the impacts will be likely felt in England too. Boris Johnson’s new plans for measures to tackle obesity could come under pressure. Unless all parts of the UK implement the same changes, England could be forced to accept food without the same labelling, for example, that Johnson is currently trying to introduce.

Tensions between Holyrood and Westminster have already driven concerns over the proposals’ impact on future UK unity. They are designed to prevent internal barriers within the UK, but if an amicable resolution is not found, they could end up doing the exact opposite.