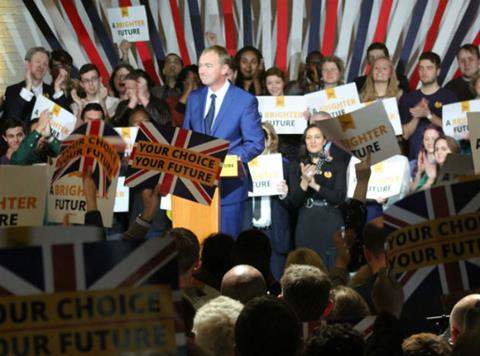 The Liberal Democrats have promised a new referendum on EU membership in their election manifesto.

Leader Tim Farron said the people of Britain had a right to a new vote on the Brexit deal being negotiated. “If you don’t like the deal, you should be able to reject it and choose to remain in Europe,” he said.

Farron said voters should not have to put up with “Theresa May and Nigel Farage’s extreme version of Brexit”, and accused Labour leader Jeremy Corbyn of letting the public down by siding with the Government on Brexit.

Here is what the Lib Dem manifesto has to say on the big issues for food and drink.

The party is promising a new vote on Brexit after negotiations to leave Europe have been completed in two years’ time. They would put a deal to a vote of the British people with the alternative option of staying in the EU on the ballot paper.

The manifesto states: “We continue to believe there is no deal as good for the UK outside the EU as the one it already has as a member. Every vote for the Liberal Democrats in this election is a vote to give the final say to the British people.”

The Lib Dems promise to press for keeping Britain “as close as possible to Europe”, with priorities including:

● Protection of rights for EU citizens and UK citizens: Like Labour they would unilaterally guarantee the rights of EU nationals in the UK

● Freedom of movement: The manifesto warns that to abandon the principle would threaten Britain’s prosperity and reputation as an open, tolerant society. They say any deal negotiated for the UK outside the EU must protect the right to work, travel, study and retire across the EU.

The Lib Dems say they would develop a new strategy to tackle childhood obesity, including restricting the marketing of junk food to children, restricting TV advertising before the 9pm watershed and closing loopholes in the sugary drinks category, which would mean taxes for the likes of added-sugar dairy drinks.

The party would establish an independent review to consult on how to set a “genuine living wage” across all sectors, which would then be paid in all central government departments and their agencies. They would also:

● Extend transparency requirements on larger employers to include publishing the number of people paid less than the living wage and the ratio between top and median pay.

● Modernise employment rights to be “fit for the age of the ‘gig’ economy”.

● Stamp out abuse of zero-hours contracts. “We will create a formal right to request a fixed contract, and consult on introducing a right to make regular patterns of work contractual after a period of time.”

The Lib Dems would introduce a national food strategy to “promote the production and consumption of healthy, sustainable and affordable food.”

They said the vote to leave the EU puts farming and agricultural businesses in “huge danger, threatening both cuts to the support which underpin farmers’ livelihoods and ability to manage the countryside, and also tariffs on exports.”

The manifesto warns of EU tariffs averaging 22.3% - putting Britain’s £18bn of food exports at risk. It says the party would:

● Continue to campaign to reform agricultural subsidies - rebalancing away from direct subsidy and refocusing support towards the public benefits of land management including countryside protection, food prevention, food production and climate-change mitigation.

● Increase the powers of the Groceries Code Adjudicator and extend Christine Tacon’s remit to include businesses “further up” the supply chain, helping to ensure that farmers receive a fair price.

The party promises to reviewing the Business Rates system, “prioritising reforms that recognise the development of the digital economy, lessening the burden on smaller businesses, and ensuring high streets remain competitive.”