Omsco set to stockpile British cheddar in the US 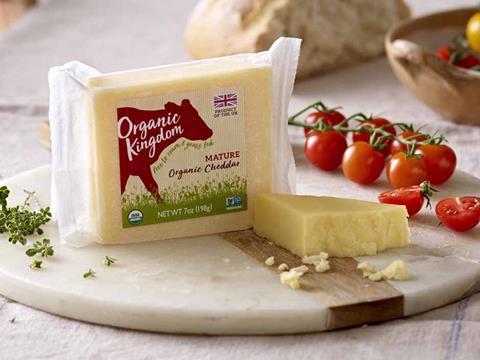 Omsco’s butter, byproduct and ingredient businesses will come under strain

Organic dairy co-op Omsco is gearing up to stockpile a year’s worth of British cheddar in the US in preparation for a no-deal Brexit.

The supplier has put plans into action to protect its US business – worth more than a quarter of its £100m turnover – ahead of what it is describing as a de facto export ban if the UK fails to reach an agreement to leave the EU.

Omsco MD Richard Hampton said the business had secured maturation, cutting and wrapping facilities across the pond to house stockpiles of its Kingdom Cheddar, with the first consignments due to leave British ports over the next week.

It comes in anticipation of what would in effect be a moratorium on organic agricultural exports following a no-deal Brexit. Without a deal, current equivalency agreements between the UK and US would be voided, preventing British organic produce being recognised as such in both the EU and US, Omsco said.

Equivalence of standards is an agreement between two countries to recognise each other’s standards as sufficient to satisfy export regulations.

However, political upheaval in the US throughout its partial government shutdown meant trade talks had stalled between the UK and US. Meanwhile, no further progress had been made on discussions to continue equivalency agreements, despite Omsco first raising the issue with Defra more than two years ago.

“In just 56 days, we’re facing a total and complete export ban on all organic dairy, and all other organic produce,” Hampton warned.

“We have only two options. First, that we’ll use these stockpiles to service our US customers for about a year, before a deal is agreed and we can start feeding in directly from the UK again. Or there’s no trade agreement, in which case we have to bid goodbye to the US, which would be a real shame because there’s a valuable and growing market there for British organic.”

Being obliged to withdraw from the market would end Omsco’s decade-long presence in the US, and put a stop to its plans to quadruple American sales through its joint venture with Wyke Farms.

The dairy co-op is also under pressure in other areas of its business, and facing the possibility it will be unable to fulfil US orders for butter as it does not have the volumes to stockpile before 29 March.

Its concerns had been exacerbated by the fact Omsco would also be forced to find new markets for byproducts and ingredients – like whey and cream – if British organic was no longer recognised by the EU, Hampton said, as there was little demand in the UK.

“We also sell milk produced to USDA organic standards into the EU for manufacture in US-bound products,” he added.

“But our butter and milk supplies are much more hand-to-mouth than cheese, so we can’t ship it out in advance. We’ve got orders secured post-March but as things stand, a product which meets standards today will be non-compliant in a matter of weeks, meaning we incur losses and lose out on opportunities.”