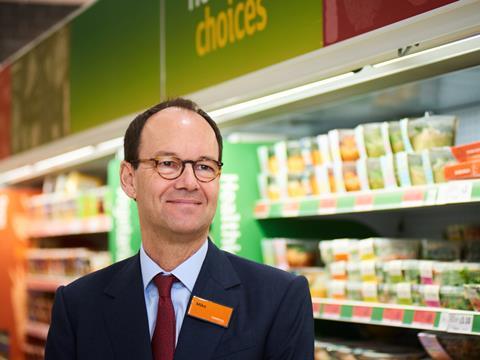 Sainsbury’s boss Mike Coupe has warned shoppers face shortages of toys, electrical items and other Christmas presents, as well as fresh food, if the UK is subjected to a no-deal Brexit.

Speaking today after blaming bad weather and tough comparisons with last year’s royal wedding and World Cup for a slump in the retailer’s grocery sales, Coupe said Brexit threatened to cause major disruption across the supermarket supply chain.

And he warned it could ruin Sainsbury’s attempts to turn around its sales after they fell 1.2% in the first quarter of the year, with grocery sales down 0.5% year on year.

“A no-deal Brexit would be very disruptive to the food supply chain in the short term,” said Coupe.

But he added Christmas toys imported from the Far East could be among those hit by shortages in the event of delays at the ports.

“We import lots of electrical goods, technology and televisions, The point I’m making is that if there is a slowdown at the ports, or that because of us leaving the EU there is an issue with tariffs, we are potentially facing a risk for supply chains, which is not just food.

Brexit is another shadow on the horizon for Sainsbury’s, which has already seen its proposed merger with Asda thrown out by the CMA. Like other supermarkets, it also faces tough comparisons with last year’s weather and events.

The pressure has been piling on Coupe to get things back on track, with the supermarket having slashed the price of 1,000 commodity products in a bid to move towards an everyday low prices strategy.

“We are trying to make the business more competitive,” he told The Grocer. “And the fact we topped the Grocer 33 pricing chart two weeks running would appear to show we’re succeeding,”

The Sainsbury’s boss also promised to revamp nearly 100 more stores by the end of the first half, having already completed 84 this year. Sainsbury’s had invested in technology that had seen 29 more Argos stores this year switch to digital formats and left 148 supermarkets with SmartShop self-scan technology, he added.

“You have to believe that if you keep doing the right thing there will be an improvement,” said Coupe.

“But I’m not going to make myself a hostage to fortune.

“There are a lot of things that could significantly affect our industry.

“If you were choosing a date for Brexit then 31 October has got to be one of the worst possible dates you could choose.”

Coupe, who said it was impossible to stockpile such goods because retailers were “in affect already stockpiling for Christmas”, added that warehouse space was full.

“We’ve have been marched up to the hill and back again twice in March and May so we are a little bit more practiced.

“But there is no way of mitigating to try to minimise disruption in the supply chain and a 31 October no-deal is about as bad as it gets.”

Coupe’s comments on Brexit came as Tesco boss Dave Lewis repeated his earlier warning of the potential impact of a no-deal.

Lewis told the BBC that the new deadline of the end of October meant there would be “less capacity” for stockpiling longer-life items and tariffs, while delays at the border could interrupt supplies of some food.

But he said leaving the EU could also provide opportunities for the UK.

“We’ll do whatever is practical depending on how things develop between now and then.

“But the challenge will always be those things which are shorter life - fresh produce. That’s what the UK imports quite a lot of,” Lewis said.