The WTO quota row: what it means for trade and Brexit

The US was among seven international nations to slam UK-EU proposals for post-Brexit allocation of WTO agrifood quotas this week in what has been described as a major setback for government. So what is going on? 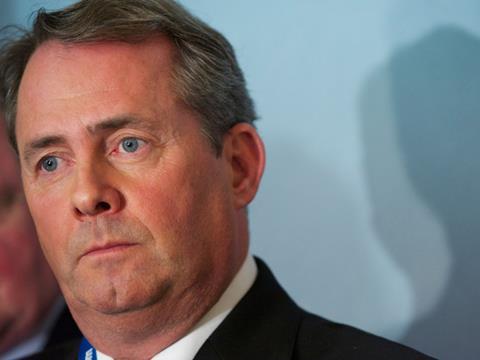 What is all this fuss about WTO quotas, and what have they got to do with Brexit?
On Tuesday, reports emerged that the UK and EU had made the first “breakthrough” in Brexit trade negotiations, having struck a deal over how to split the EU’s existing tariff-rate quotas (TRQ) for key agrifood imports once the UK exits Europe and establishes itself as an independent member of the WTO. Speaking to Bloomberg News, Liam Fox described the “agreement on the methodology of splitting EU quotas” as a “good step forward” towards Brexit.

However, hopes of a smooth transition were dashed when it emerged just days later that the US, Brazil, Argentina, Canada, New Zealand, Uruguay and Thailand had already rejected the proposed UK-EU approach in a strongly worded letter of complaint sent to UK and EU representatives at the WTO on 26 September 2017.

In the letter, the six global trade heavyweights argued the UK-EU agreed methodology was not consistent with WTO principles. “We cannot accept such an agreement,” they insisted.

Right. So what exactly are TRQs? And what was the UK-EU proposal for splitting them?
TRQs are the mechanism by which the EU imports specific volumes of agricultural goods like meat, grains and sugar from countries around the world at a reduced or zero rate of customs duty. The 124 TRQs held by Brussels on behalf of the 28 member states were agreed at the last completed round of WTO negotiations in Uruguay in the 1990s and have remained largely unchanged since, except for some upward adjustments when new member states have joined.

Brexit raises the issue of what happens to these quotas when the UK leaves the EU and establishes itself as an independent member of the WTO in 2019. The UK-EU proposal was to introduce a technical rectification of the existing tariff agreements, which would split the existing quotas based on historical trading averages. For example, New Zealand can currently ship 223,000 tonnes of sheep and goat meat to Europe each year under its TRQ, but the UK buys on average 80,000 tonnes of that. So the proposed approach would see the UK have an agreement with NZ for 80,000 tonnes, and the EU reduce its quota by the same amount, thus maintaining the status quo.

This would ensure European farmers do not suffer from increased competition when the size of the EU market is reduced post-Brexit, and the UK has consistency when it comes to the supply of agricultural imports from around the world.

Sounds sensible. So what’s the problem?
While splitting the TRQs in this way would be a win-win for the UK and EU, it would reduce the amount of flexibility that third countries currently have when exporting to Europe. For example, if demand for lamb is lower in the UK than usual one year, New Zealand currently has the option to send more to other EU countries. If the quota were split between the UK and EU, they would lose this flexibility and potentially end up missing out on some of their tariff-free benefits.

What’s more, the nature of the EU free market means historical trading data is not particularly accurate. For example, trade data would suggest that the UK currently imports very little Brazilian beef at the moment, but that’s because a lot of the major shipments are coming transhipped via Rotterdam.

The US and six other countries opposed to the move argue that splitting the TRQ based on historical averages would therefore not be consistent with the principle of leaving other WTO members no worse off than they are at present, both in terms of the quantity and quality of access.

Oh dear. So what happens next?
UK and EU representatives were reportedly due to go to Geneva to present their proposals to the WTO in the next few weeks. However, the letter of objection sent by the US et al suggests any attempt to split the TRQs though a technical rectification would be blocked by other WTO members. This would mean the UK and EU would have to renegotiate TRQs with third countries, which would be a big challenge given the short time-frame involved.

What is the UK government saying about it all?
The Department for International Trade has issued the following statement: “In leaving the EU, we will need to update the terms of our WTO membership where, at present, our commitments are applied through the EU as a whole. The UK wants to ensure a smooth transition, which minimises the disruption to our trading relationships with other WTO members, and tariff-rate quotas are one of the issues we are discussing with the EU, and with WTO members.

“We intend to discuss our proposals on TRQs and other matters extensively with our partners in the WTO before proceeding. However, we still believe that technical rectification remains the most appropriate procedure for introducing UK schedules into the WTO and are committed to working constructively and openly with our international partners throughout the process.”

What are the potential risks for the UK?
The biggest issues are the extra layer of time and complexity that new TRQ negotiations would add to the already very complicated process of Brexit, as well as the potential for disrupting food supplies in the UK.

If the UK doesn’t have agreed duty-free or reduced tariff access for agricultural goods by the time it establishes itself as an independent WTO member in 2019, it wouldn’t be allowed to allocate reduced tariffs to exporting countries on an arbitrary basis, meaning it would be stuck with high import tariffs on all agricultural goods.

The unreliable nature of historical trade data means we could also end up in a situation whereby the UK renegotiates the TRQs in time but under-estimates the volumes of imports from third countries needed to maintain consistency in supply, which would have an impact on both food security and food prices in this country.

On the flip side, the UK might be forced to agree higher reduced tariff quotas with exporting countries than it wants to, with negative consequences for British farmers. Most exporting countries will see Brexit as an opportunity to gain greater market access to Europe and the UK, and the government will not want to annoy potential trading partners as it looks to negotiate free-trade agreements (which are separate to the TRQs).

But it doesn’t mean we’ll have to allow imports of chlorinated chicken does it?
No, the TRQs have nothing to do with the sanitary and phytosanitary measures WTO members can apply to protect their citizens from imports of foods they perceive as unsafe. However, once the UK is an independent member of the WTO it will have to decide whether it will adopt the same position as the EU on things like chlorinated chicken and hormone beef, and present its own scientific arguments for doing so.

What does all this tell us about the approach to UK-EU approach to Brexit?
Well, that’s perhaps the most significant part of this whole debacle. While the issue of what happens with TRQs post-Brexit is important to resolve, the much bigger issue for the UK agrifood sector - both in terms of imports and exports - is what will happen with regards to UK-EU trade.

And the fact TRQs are even on the table tells us definitively that UK policy makers are not going down the route of remaining in the EU customs union, because if that was the case there would be no need to change WTO quotas.

With a single market approach already off the table due to the requirements around freedom of movement for citizens, that means the UK is staring down the barrel of a hard Brexit, with future access to the European market dependant on whether negotiators can hammer out a decent UK-EU free-trade agreement.