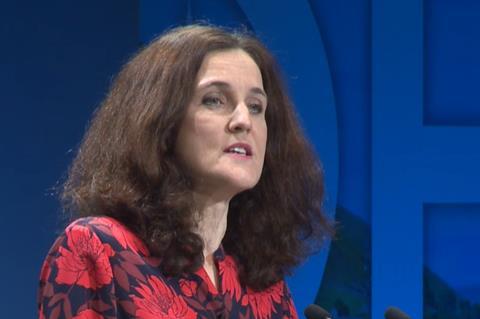 Speaking at the 2020 Oxford Farming Conference today (8 January), Villiers said the high standards of British farming were “the backbone of our biggest manufacturing sector – food and drink”.

Following mounting fears from within the food sector that standards would be sacrificed to secure free trade deals, Villiers insisted backing better food standards was “a core part of this government’s approach to Brexit”.

The UK could maintain or even enhance UK food standards as it negotiated new global trading agreements, she suggested, and would “defend the national interest strongly” on the issue.

“We’ll be prepared to walk away from those negotiations if that’s in the national interest,” Villiers told delegates. “Please be reassured, as our manifesto says, and as our prime minister has said – we will not imperil our domestic and international reputation, which is built on quality.”

Villiers also confirmed the government would reintroduce its agriculture bill to parliament – which hit the buffers in the run-up to the general election – later this month.

It would move the UK away from the EU’s “bureaucratic common agricultural policy”, she added, and towards the government’s previously announced approach where farmers and land managers were rewarded with “public money for public goods” – such as enhancing biodiversity, tackling climate change and raising standards of animal welfare.

But despite the urgings of NFU president Minette Batters, Villiers wouldn’t be drawn on calls for the creation of a new independent food standards commission to scrutinise proposals in trade deals and make recommendations on the UK’s future food trade policy.

Elsewhere, Leon-co-founder Henry Dimbleby – who is leading Defra’s work on the creation of a national food strategy – told the conference he expected to present an interim report by the spring.

Its findings would then be scrutinised in a series of citizen’s assemblies across the country during the autumn, before a final report is published before the end of the year.

Some of the strategy’s key themes would look at the price of food, obesity and the sustainability of food production systems, alongside their impact on the climate, Dimbleby said.

He also reinforced calls to avoid importing food produced to lower standards after Brexit by insisting “we need to start framing the carbon problem as one of both production and consumption”.

Production-only climate change targets made “no sense”, Dimbleby suggested. “What is point of doing the enormous amount of work required to produce a net-zero farming economy here in the UK if we then just import the carbon from other countries.”

The same principle applied to animal welfare, biodiversity and environmental pollution, he added.

“It would be wrong to create a gold standard for farming in this country and then incentivise those harms overseas in the form of lower standard food imports. We must apply the same standards [created in the UK] to food imports.”

The government had pledged to produce a white paper on the food strategy’s proposals within six months, Dimbleby said.