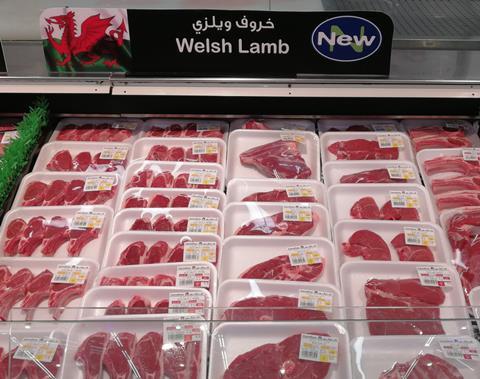 The Welsh government was ’very unhappy’ at the lack of progress in trade deal negotiations, said Lesley Griffiths

Wales’ environment minister has laid bare the Welsh government’s frustrations over the impasse in post-Brexit trade negotiations, and warned the lack of progress was “hugely concerning” for Welsh food and drink businesses.

Speaking to The Grocer as she outlined a coronavirus support plan for the Welsh food and drink sector, Lesley Griffiths bemoaned the “lack of clarity” and information available to a Welsh food sector already hit hard by the coronavirus pandemic.

With just five months to go until the end of the Brexit transition period and export markets to the EU in particular so crucial for Welsh producers, ministers in Cardiff were “very unhappy” at the lack of progress in negotiations, the MS for Wrexham said.

“Every Welsh government minister pressures their [UK government] counterpart on the issue at every opportunity,” she added, while suggesting she had little confidence in a breakthrough before the end of the year.

“Producers are faced with the parallel challenge of the pandemic and the EU transition and the outcome of trade negotiations, which is impossible to predict,” Griffiths said. “I met with my counterparts in Defra and across the UK last week, where we just repeated the same things – we need to know about these trade negotiations.

“On EU negotiations, nothing is happening as far as I can see. We’ve really pushed the UK government to extend the Brexit transition period – but they’ve refused do that.”

Negotiations with the US and Japan “aren’t going particularly well either”, she added. “So it’s hugely concerning for our food and drink sector.”

The Welsh government’s new Covid recovery plan offers support to producers in areas such as market intelligence; business advice on areas such as developing DTC propositions; targeted investment in people and technology to build business resilience; and by maintaining a global trade presence via virtual engagement and at its key event Blas Cymru/Taste Wales next year.

More than £823,000 in emergency funding had also been handed over to 132 dairy farmers affected by the pandemic.

Producers had been “very innovative” in reacting to the crisis, Griffiths said, citing how many had pivoted to DTC models, while Welsh shoppers had embraced local produce.

But “irrespective of the outcome of the actions detailed in the plan, if we get a no-deal Brexit we can only imagine the damage that’s going to be done to the sector”, she warned.

The UK government’s Department for International Trade has been approached for comment.

Proposals by the UK government to create an internal UK market from next year – seen as a “power grab” from the devolved administrations by many commentators – were also criticised by the minister.

The plan aims to prevent new barriers to trade within the UK, which should also help Westminster conclude trade deals. However, it has been criticised for failing to take into consideration the views of the devolved governments on issues such as food standards.

“We’re very concerned,” Griffiths added. “There are parts [of the proposals] which are devolved and they are just ignoring them. The EU referendum was not a referendum on devolution,” she said.

“So we shouldn’t be seen as [just] a stakeholder or someone they feel they should have to consult. We are equal partners around the table.”

Griffiths’ comments come as Welsh government data showed total sales of food and drink in all channels had fallen by 27% over the course of the pandemic, largely due to the closure of the foodservice sector. However, grocery sales were up £38m (10.7%).

“Whilst some Welsh food and drink businesses have flourished during the crisis, many more have and continue to be affected significantly,” said Food & Drink Wales Industry Board chair Andy Richardson.

The government recovery plan would help “get Welsh food and drink back on its feet following the crisis and continue our upward trajectory of growth, employment and global influence”, he added.