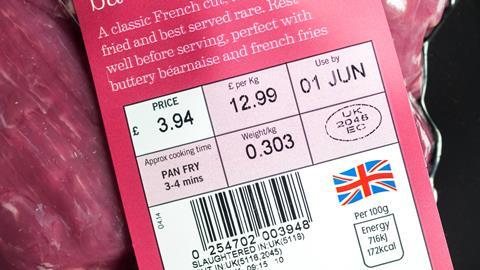 What happens to food labelling if there's a no deal Brexit?

Businesses are concerned by the cost and scale of the task that faces them, with time running out and a no-deal looming

Defra’s new guidance on food labelling in the event of a no-deal Brexit hasn’t done much to reassure retailers and manufacturers. The FDF is being inundated with enquiries about labelling, among other issues, director Ian Wright told BBC Radio 4’s Today programme this week. And the BRC has lamented the “lack of clarity” from the government over what the new labelling ­system will look like.

So what are the biggest concerns for industry? And what assurances, if any, does Defra’s guidance offer?

Earlier this year, the FSA held a consultation on proposed new UK health and identification marks for products of animal origin - just one of the labelling changes that will apply post-Brexit. The proposal, to keep changes to the mark “as simple as possible” by removing the ‘EU’ or ‘EC’ prefix but keeping everything else the same, was welcomed by industry.

‘Keeping the same design reduces both the administrative burden and the risk of unintentionally using the wrong mark, particularly on products with long shelf lives,’ noted Tesco in its response.

However, even such a simple change will be extremely costly, the consultation revealed. According to the Chilled Food Association, the average label plate change costs about £2,000 per product, which could amount to a £24m bill for the chilled food sector, with some 12,000 SKUs.

That cost isn’t the only worry for UK food businesses, many of which have thousands of SKUs that will be affected by the various labelling changes. “We will need to change over a high number of SKUs and will require adequate time to administer this change,” said Kerry Foods.

Businesses also need time to work through old packaging stocks, they warn. Many make minimum purchase orders of packaging to keep costs down, which means they hold large quantities in stock - enough to last them anywhere from six months to five years. If they were forced to dispose of that packaging, there would be significant additional cost to both industry and the environment.

“A suitable transition period will allow businesses time to sell their stock on with the current labels and artwork, and minimise the cost of trading losses,” said Tesco.

The government also mustn’t underestimate the “demand there would be on packaging suppliers, design studios and printing companies if all FBOs needed their packaging redesigned and printed within a short time,” the BMPA warned. “We suggest that there be ideally a 24-month transition period, but at the very least, a 12-month transition over to the new health mark.

The government has taken these concerns on board, Defra’s guidance suggests. It confirms businesses will be allowed to use the old EU health and identification mark on products ‘produced and sold in the UK’ until 31 December 2020.

Businesses will also have a 21-month transition period to make other labelling changes, such as ensuring there is a UK address for the responsible FBO or importer on the label, it says.

The government has also promised to take a ‘pragmatic’ approach to enforcing other labelling changes for food and drink sold on the UK market, some of which will be required from 29 March 2019. These include removing the EU emblem from goods produced in the UK and replacing any reference to ‘EU’ origin with ‘UK’.

Read more: Theresa May can play fast and loose with jam but not people’s livelihoods

However, Defra admits it has ‘no control’ over how food labelling changes will be enforced outside the UK. ‘EU and non-EU countries may require wholly accurate labelling for access to their markets,’ its guidance says.

An FSA spokesman confirms businesses exporting UK products of animal origin to the EU will have to replace the EU health and identification marks with the new UK marks “from 29 March 2019”.

And therein lies the rub. Because, with just weeks to go until the Brexit deadline, these marks have yet to be released. “There seems to be EU reluctance to accept the new design developed by Defra”, says Tim Rycroft, chief operating officer at the FDF. “This is a major concern for suppliers.”

When approached by The Grocer with these concerns, the FSA promised an update on the new health and ID marks was imminent. “We are in the process of finalising the design of the new health and ID marks,” said the spokesman. “This is being discussed with the European Commission and we will be updating businesses shortly.” The FSA was “confident” UK products would be accepted in Europe and the rest of the world after Brexit, he added. “They will continue to display an appropriate mark that clearly shows the product has been subject to the strict health and welfare checks that will continue after the UK leaves the EU.”

But time is running out. And there is similar uncertainty over the other UK labels that are ­currently EU-approved.

The organic mark is one. Defra has confirmed that unless the UK and EU reach an equivalency arrangement - where both still recognise each other’s standards - before exit day, the EU organic logo cannot be used on UK products from 29 March. Those trading within the UK or exporting to countries outside the EU will be safeguarded by the creation of a new UK logo, Defra has promised, but UK businesses will only be able to export to the EU if they are certified by an organic control body recognised and approved by the EU. To do this, UK bodies will need to apply to the European Commission for recognition, but that process might take nine months and they can’t begin until the UK officially becomes a ‘third country’.

With all this uncertainty and delay, industry is understandably nervous. One senior source may have summed up the current sentiment, saying that if the UK crashes out with no deal, businesses exporting food and drink to the EU are “basically screwed”.

At a glance: When will labelling changes be required?