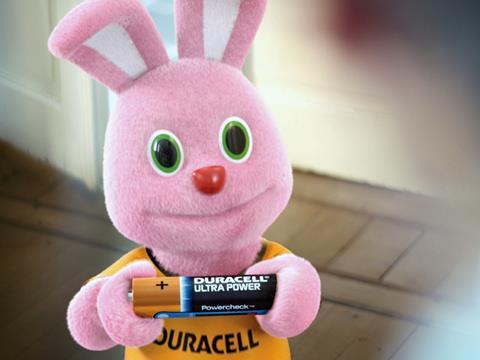 Duracell’s drumming bunny mascot has been forced to take a break – temporarily – by advertising watchdogs.

The Advertising Standards Authority has ruled that a TV ad showing the rabbit character playing the drums alongside 12 gorillas said to be running on zinc batteries cannot be shown again in its current form.

In the ad, a voice-over stated “You all know Duracell last longer than leading zinc batteries, but exactly how much longer?”, as the gorillas were shown running out of power one-by-one while the Duracell bunny played on. The voiceover added:  “Not even 12 leading zinc batteries can outlast one new Duracell Ultra Power with Duralock”, and finished with the quote “Duracell. Lasts longer, much longer”.

Manufacturer Procter & Gamble UK argued that the claim was supported by two test reports that they had provided to the advertising watchdog.

However, the ASA concluded: “We considered the test data provided was not sufficient to demonstrate that the advertised product lasted longer than 12 leading zinc batteries consecutively used, in general usage, based on tests on a representative device. We therefore concluded that the ads were misleading.”

The ruling comes two weeks after the announcement that Warren Buffett’s Berkshire Hathaway is to acquire Duracell. P&G plans to execute a split transaction, in which it will recapitalise Duracell and exchange it for Berkshire Hathaway’s shares of Procter & Gamble stock.