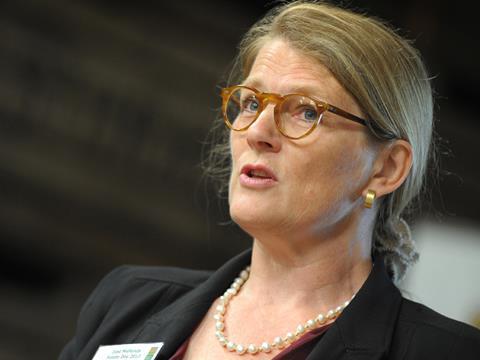 A group of MPs have urged the government to consider extending the remit of the Groceries Code Adjudicator (GCA) to include dairy farmers and other small-scale producers.

A 25-page report into dairy prices and the crisis faced by the industry was published today (20 January) by the House of Commons Environment, Food and Rural Affairs (EFRA) Committee. It claimed the powers of adjudicator Christine Tacon were “too restricted” to be of assistance to the majority of dairy producers, as they were classed as “indirect suppliers”.

An often scathing report repeated the committee’s initial recommendation when the GCA was formed - that it should be able to accept complaints from indirect suppliers on the relationship they had with the mults - and described as “extraordinary” the fact the GCA had existed for more than a year with no practical ability to use her legal powers.

“We seek a clear explanation of why the GCA has been left so long without the teeth she needs to do her job,” noted the committee, which bemoaned the government’s delay in deciding what constituted the right level of fine for retailers. It called for the power to fine to be activated before the upcoming general election.

“The vast majority of dairy farmers fall outside the protection offered by GCA,” said committee chairman Anne McIntosh MP. “The EFRA Committee thought that was wrong when the GCA was set up in 2013, and events since then justify our view that her remit should be extended to include small-scale suppliers, whether or not they have a direct relationship with the ultimate seller of their produce.”

A spokeswoman for Tacon declined to comment on the report. The adjudicator had given evidence to the committee in November, when she declared she was happy with her powers.

It also suggested a review of the dairy industry’s voluntary code later this year should “take full account of the lessons learned from the present market conditions”, adding that “closer attention was needed to the damage sharp and rapid shifts in price can do to the industry”.

“Frequent, sharp and unpredictable rises and falls in milk price are driving dairy farmers out of business every week,” said McIntosh. However, the committee recommended that the dairy industry code should remain voluntary.

Pointing to the effect events such as the Russian trade embargo had on dairy prices, the report authors conceded that “neither a statutory or voluntary code can set or regulate prices in an open market”.

EFRA members also called for an EU-wide review of the milk intervention price - when member states intervene to buy products if they fall below a certain price - and suggested the creation of producer organisations as one way of increasing the market influence of dairy farmers.

Dairy UK CEO Dr Judith Bryans supported the committee’s recommendation that the government explore “practical steps to help the export of UK dairy products”, with “clearly identifiable areas where government can help, such as the simplification of export documentation and the funding of foreign inspection visits”.

However, she questioned whether extending the GCA’s powers would help to address the challenge of price volatility, noting that contractual relationships between farmers and processors were already covered by the voluntary code.

Defra said the government understood “the current pressures on milk prices caused by the volatility of the global market” and was doing all it could to help manage it.

On the GCA, Defra added: “We strongly support the work of the Groceries Code Adjudicator. Its jurisdiction is currently limited to the scope of the Groceries Supply Code of Practice, and does not cover pricing - which is the responsibility of the Competition and Markets Authority.  There will be a statutory review of the GCA next year.”