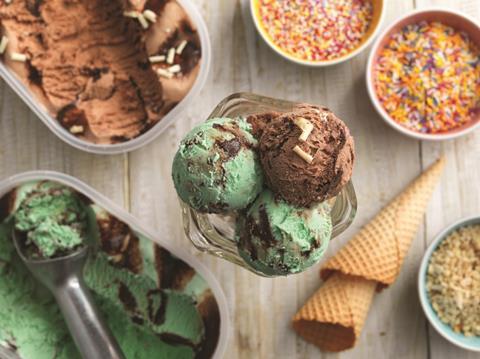 Iceland has launched its first own-label gelato range alongside a selection of new ice creams.

Iceland Belissimo – a two-strong gelato range crafted and sourced from Italy, is being rolled out tomorrow (15 April) in chocolate and a mixed fruit variants (rsp: £2/850ml tubs).

The retailer, which already sells branded gelato, said it was “thrilled to bring a genuine Italian gelato” to its stores. ”‘Ice cream is a real Italian institution, and our new gelato range is synonymous with this tradition, quality and taste,” said joint MD Nigel Broadhurst.

For those watching their waistlines, the retailer has launched tropical and berry flavoured Solo lollies that contain under 100 calories (rsp: 89p/three-pack), while the Mini Ice Cream Donuts - vanilla ice cream dipped in milk chocolate and topped with colourful sprinkles, has been designed for shoppers looking for a “smaller and lighter ice cream indulgence” (rsp: £2/eight-pack).

For those with a bigger appetite, Iceland’s new King Cones are more than double the size of a standard ice cream cone and feature Mr Whippy-style ice cream in either creamy vanilla or chocolate flavours (rsp: £2/two-pack).

The frozen food giant said it had put “a great deal of work” into perfecting its frozen treats portfolio this year.

“Whether enjoyed as a sweet treat on a warm day or as the finishing touch to a party with family and friends, our new selection is sure to be a hit this summer,” said Broadhurst.