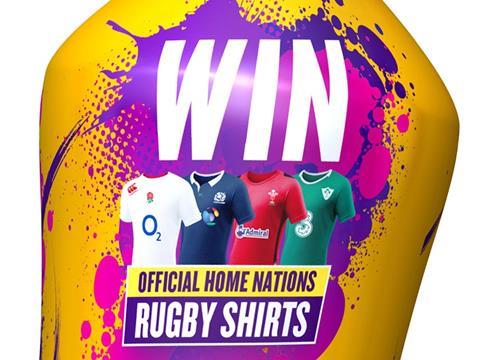 Lucozade Sport will give away a rugby shirt every 80 minutes for 90 days as part of its Rugby World Cup 2015 campaign.

The brand - a supporter of the England, Ireland, Scotland and Wales teams - is carrying out a range of activities around the tournament, which takes place in England and Wales from 18 September to 31 October.

The push is part of a £9m spend for the brand this year and will include a TV ad, digital, sampling and in-store activity. The shirt giveaway will be run via an on-pack promotion from 3 August to 31 October.

The brand - which will offer rugby-themed PoS tailored to the English, Irish, Scottish and Welsh teams - said the tournament represented a huge opportunity for retailers to attract new shoppers to the category.

“The summer of football last year had a significant impact on the sales of sports drinks, with penetration up 26.6% and Lucozade Sport attracting 54% incremental shoppers to the sector,” added Lucozade Sport marketing manager Vicky Morgan. “To replicate the success this year, we’ll be working collaboratively with our retail partners to help them develop impactful in-store theatre with our suite of rugby themed POS and a relevant on-pack promotion.”