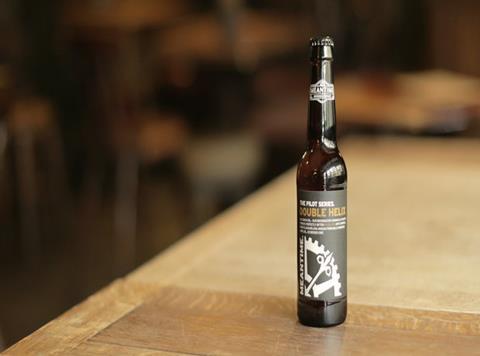 Meantime Brewing Company has unveiled a limited edition beer based on a person’s DNA.

Double Helix, a 10% abv double-IPA, was created by the Greenwich-based company’s brewmaster Ciaran Giblin after genetic profiling revealed he was programmed to have a taste preference for bitter flavours like those found in coffee and Brussels sprouts.

Made from American hops, it has a “bitter and hoppy” flavour with tropical fruit aromas, and is being sold in boxes of 12x330ml bottles (rsp: £21.75 plus delivery charges) online and from the brewer’s shop.

Double Helix is the first of 12 limited edition beers scheduled to launch this year under Meantime’s Pilot Series range, which showcases new and unique small-batch beers.

Giblin, who had his DNA tested and analysed by genetic testing company 23 and Me, described the latest offering as a “successful experiment” that others could enjoy as well.

“There are lots of people talking about the potential that genetic testing has on what we consume but I thought the best way to test some of the theories was to get on and brew something,” said Giblin.

“Meantime has always strived to introduce the British public to a wide range of great beers and open their minds to trying something different. The Pilot Series gives us the perfect opportunity to continue pushing the boundaries of modern craft and have a bit of fun experimenting with some unusual beer styles.”