Got Milked? 'Unnecessary and harmful' shock book hits out at milk 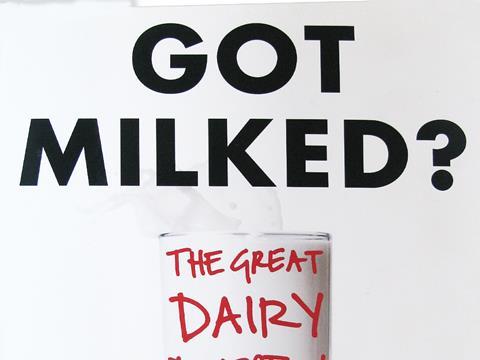 A controversial new book, published in the US this month, is set to reignite debate about the dietary benefits of dairy. Got Milked?, by author Alissa Hamilton, claims not only that milk is unnecessary in daily diets but that it is making people sick.

Much of the book is US-focused - with Hamilton taking a pop at the US Dairy Food Group and US farming - but many key allegations against milk are universal and can be expected to gain traction with readers in the UK too. The UK dairy industry, therefore, needs to be prepared.

We asked Dairy UK CEO Judith Bryans to set out the industry’s response to the book’s five key claims.


Milk is not necessary for nutrition: Hamilton’s major claim is that milk is not essential to diet because calcium is plentiful in leafy greens and often better absorbed from veg. She also hits out at other nutritional claims made about milk, arguing that it is a poor source of nutrients.

In response, Bryans points out milk, cheese and yoghurt are by far the biggest sources of calcium in the UK diet. “Many people would find it difficult to meet their calcium requirements without them.”

She adds, contrary to Hamilton’s claims, it is “well-established” the calcium from dairy is easy to absorb, according to EU rules, a 200ml glass of milk can be described as “a good source of protein, calcium, iodine, vitamin B2 and vitamin B12 and a source of potassium, phosphorus and vitamin B5”.

Bryans says weight gain is related to calorie consumption, and milk is actually a relatively low-calorie food. She adds that, as a good source of high-quality protein, milk can help increase satiety, and a review of 16 randomised clinical trials found weight loss diets with dairy products were more effective than those without.


Milk is highly processed and not ‘natural’: In particular, Hamilton raises concerns over homogenisation and claims there is “an ongoing area of investigation” into whether the process is safe.

Some processing is necessary to make milk safe, Bryans explains, and rejects the assertion homogenisation could be dangerous. “The claim that homogenisation has a negative health impact relates to an old and unproven theory around an enzyme called xanthine oxidase and its effect on the heart,” she adds. “This theory was first debunked in a paper by researchers in the early 1980s. Other researchers have also done so since then.”


Milk consumption has been linked to cancer: Hamilton says studies have shown casein, which makes up 87% of milk protein, promoted “all stages of the cancer process” and that dairy’s high calcium and phosphorous content could explain a link between high dairy consumption and prostate cancer.

Bryans says the lab findings on casein quoted in the book “are not applicable to human health”. She adds a 2007 World Cancer Research Fund report concluded there was “insufficient evidence to show milk consumption increased the risk of prostate cancer”.

However, Bryans says the main Swedish study Hamilton refers to has been heavily criticised, with scientists, including the research authors, calling for “extreme caution in interpreting its results”. The claim that protein leaches calcium from the bone is based on a debunked theory that milk is an acid-­producing food, she adds.