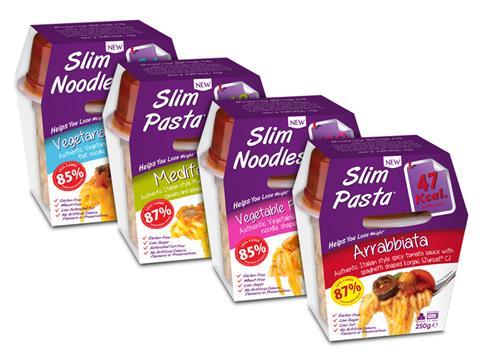 A brand of pasta, noodles and rice based on low-carb, gluten free alternative konjac has won a listing in Holland & Barrett for its new range of ambient ready meals.

The range was developed by KI with seafood company Thai Union, with which KI announced a partnership last month. KI already produces plain packs of Slim pasta, noodles and rice, which are listed in retailers including Asda.

The pasta and noodles used in the products is made from the processed corm (underground part of the stem) of the konjac plant, a traditional Asian food that is about 85% lower in carbs than wheat. Konjac noodles are sometimes criticised for their texture and the fact that they must be kept in water; in response to this, KI developed a recipe called Juroat C, which it said delivered a product much closer to traditional pasta and noodles, that can be packed without water.

Thai Union’s GM sales and marketing, Pichitchai Wongpiya, said the partnership would be a focus for his company in 2016. “We researched many konjac manufacturers in Asia to develop the next generation in healthy, low-calorie and carbohydrate ready meals,” he said.

“Konjac Innov offered us a solution that not only pushed the boundaries of konjac innovation, but also delivers a high-quality, premium product that is incredibly low-calorie, which is something we know our customers are looking for.”