Back from the dead? Halloween category report 2017

Could combining Halloween with Bonfire Night and Day of the Dead help resurrect growth?

Has Halloween had its day? Given that sales of Halloween goods in the supers fell 3.1% on volumes down 4.3% during last year’s witching season [IRI 52 w/e 5 November 2016] you might be forgiven for thinking it had.

Well, you’d be wrong. “Halloween is now the third biggest event in the calendar and for Asda it marks the start of the fun and exciting family festive season that builds up to Christmas and new year,” says a spokesman at the retailer, which has capitalised on its connection with the US (Asda is owned by Walmart) to drive the festival’s popularity.

“Thanks to Walmart, we’ve been able to ensure we’re at the forefront of driving innovation through the design of new and exciting, high-quality products, and to make sure Asda customers get great value for money.”

Still, sales of seasonal Halloween confectionery and cakes have fallen by a fifth (see p50); regular gums and chews (ie those not branded specifically for Halloween) are also down, as are sales of home baking goods.

The fall in sweets and home baking partly reflects general declines in these markets. It also reflects how the nature of Halloween and the opportunity it presents retailers is evolving. More adults are getting involved, making everything from booze to pet clothes (yes, pet clothes) ripe for a spooky makeover.

So the witching season is no longer just about trick or treating. Nor is it purely about Halloween. Many suggest there’s potential for the supers to make more of Bonfire Night and the Mexican Day of the Dead (2 November) and turn the days surrounding these festivals into one week-long celebration.

“There is no way that Halloween has peaked,” says Rich Ford, retail analyst from Sherlock Studio. “There is so much more retailers can do. Just look at America. What we will increasingly see is less Halloween-specific stuff and the merging of three celebrations into one.”

The UK’s thriving Mexican restaurant culture means many are already conscious of the Day of the Dead, while the stationery chain Paperchase and luxury biscuit maker Biscuiteers have also tapped the trend with skull-festooned stationery, skeleton decorations and colourful zombie cookies.

Although culturally different, the three events, which fall within a week of each other, are loosely united by an interest in the macabre. This could be good news for retailers who fear having unsold stock of specifically branded Halloween goods. It would also help negate variances in sales from year to year driven by the day on which Halloween falls - last year’s fell on a Monday; this year’s will fall on a Tuesday. 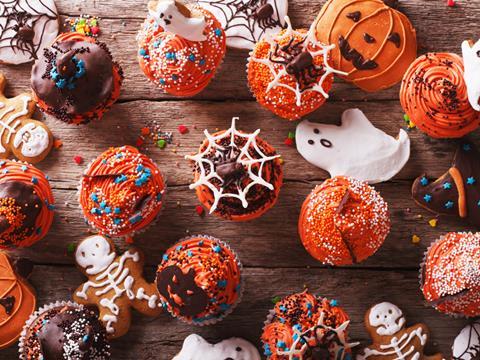 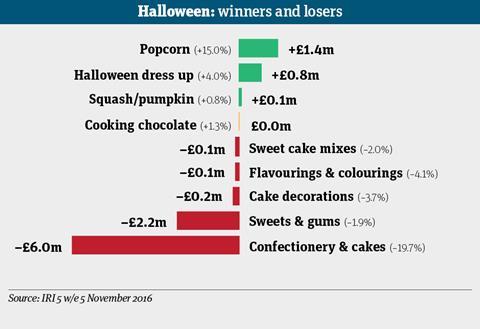 The decline in trick or treat confectionery and cakes is in spite of six of the top 10 brands in these sectors ramping up featured space deals in the run up to last Halloween. “Whilst the Halloween period is relatively short lived, some brands continue to invest in rebranding their products to maximise the sales opportunities,” says Kay Staniland, director at Assosia, which carried out the research.

“Some of the confectionery brands are maximising their spending power by dominating the featured space displays, first with a combination of Christmas and Halloween treats, which soon switches to Christmas lines for the following two months.”

The fall in confectionery and cake sales last Halloween can partly be explained by the fact that Halloween did not fall at the weekend, but there’s another issue: ongoing concern over sugar consumption. Confectionery manufacturers are reformulating. Fruitella, for example, has reduced sugar by a third in its new party mix bags, sweetening instead with natural flavours and fruit juice.

Nevertheless, Haribo - which claims to shift the most sweets over Halloween - says it saw growth last October thanks to its range of seasonal sweets and multipacks. “As the number one manufacturer at Halloween, preferred by six in 10 shoppers, Haribo drove the greatest growth within this category and experienced a 25.7% increase in sales,” says seasonal brand manager Claire Caley.

The concept of trick or treating is evolving too. For example, in some parts of America trick or treating is being replaced by ‘trunk or treating’ - themed events in car parks where sweets and cakes are dispensed from decorated car boots. There’s potential for British retailers to look at how trick or treating could develop on this side of the pond, says David Martin, joint MD of retail design agency M Worldwide.

“Trick or treating could be reinvented,” says Martin. “There have been issues in recent years - safety concerns about encouraging kids to go out and knock on people’s doors, so there could be a move to trick or treating in-store - to encourage people to come in instead of going online.”

Ford goes one step further: ”It could be the equivalent of Santa’s grotto, but for Halloween.”

Shops need to be more agile and open to new ideas, he adds. “Halloween should transcend all categories. Retailers should try new things, be it pop-ups, events in-store or personalisation and customisation of cakes or decorations. There’s room for individual creativity; you only have to look at Instagram or Pinterest to see its popularity.”

Ford agrees, adding that the event is moving away from confectionery and becoming broader. “It is about the experience and not just food, he says. “From that point of view it is quite different to Easter or Christmas. People want experiences that are more aligned to leisure time and there is a gap at that time of year. We don’t have Thanksgiving, so people are looking for something to rally around. It’s also very Instagrammable.”

Indeed, there are nearly 50 million posts on Instagram using #Halloween. A pretty safe bet is that most of these feature people dressed up in ghoulish costumes. In the UK sales of Halloween costumes through the supermarkets continue to grow - in spite of headlines around the fire risk some can pose (in 2014 TV presenter Claudia Winkleman’s daughter suffered horrific burns after hers caught fire) - having grown 4% to £20.8m.

But Halloween is no longer just about children, or indeed for those with children. Adults are getting in on the act, suggesting there’s scope for larger ranges of adult costumes at the supers. At the annual Halloween Expo in New Orleans this January, outfits for grownups were very much the rage. Some even say it’s time for pets to join the spookfest.

“It’s been clear for years that pets - dogs especially - take a central place in family life,” says Gracia Amico, CEO for online pet shop PetsPyjamas, which has seen a surge in sales of Halloween related products in recent years. “Additionally, with people choosing to start families later or not at all, a sense of family often starts with a dog. So it’s no surprise that with Halloween becoming an increasingly celebrated occasion in the UK, our pets are getting in on the fun too, be it dress-up, accessories or special treats.”

Adult interest does not end with killer costumes. “Our insights show that one in two adults purchase Halloween-related products,” says Mondelez, which makes spooky Cadbury Screme Eggs for Halloween. “The majority are 25 to 34-year-olds, with a 29% share of the market, while 25% of those celebrating Halloween are 35 to 44 years old.”

Caley at Haribo agrees that millennials are keener than ever to get involved. “Kids and grownups love Halloween. While larger households with children are the most engaged with the occasion, it is also important not to forget households without children as they account for 72% of total Halloween spend.”

This suggests Halloween orientated products aimed at adults are an untapped opportunity. In booze, for example, only Hobgoblin Ale (the ‘unofficial’ beer of Halloween) has made any big play for the dominance of the festival, although Beavertown Brewery’s pumpkin beer Stingy Jack is a seasonal bestseller for the London company. In September Diageo launched a limited-edition pumpkin spice variant of Baileys, inspired by the popularity of pumpkin spice lattes in coffee shops.

Pumpkins, of course, are big business. Last Halloween, the craze for jack-o-lanterns caused an 8% spike in the number of pumpkins sold to 9.3 million. The British Growers Association estimates only 5% were actually eaten, suggesting more could be done to encourage Brits to cook with their pumpkins.

Last year M&S did just that through its Adventures in Food initiative, which included ads featuring recipes using autumnal veg. Online, the retailer gave shoppers a guide to carving their own pumpkins along with a recipe for paprika pumpkin seed snacks. And Waitrose added white ‘ghost’ pumpkins to its veg aisles for the witching season.

The humble pumpkin might seem old hat in a year or two. US retailer Spirit of Halloween predicts that animatronic displays - lifelike animated robots - could become the next big thing. Its zombie decorations, frankly, are enough to give anyone the heebie-jeebies. So Halloween is far from dead. Rather, it’s undead.