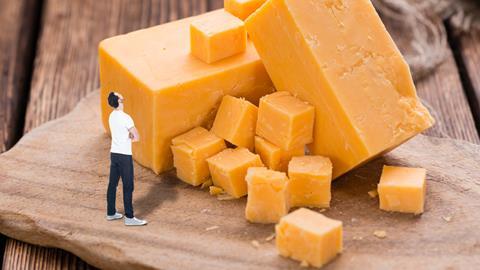 Lockdown has seen cheese become massive in grocery, racking up more than £830m of sales in just 12 weeks. Who’s cashing in?

Forget panic-bought hand sanitiser and loo roll. One of the most important items in shopping baskets during lockdown has been cheese. Brits have been gorging on the stuff. Cheese, right now, is big.

In supermarkets, at least. Covid-19 prompted a collapse in foodservice, leading to heart-rending scenes of farmers pouring unsold milk down the drain and artisan cheesemakers pleading for help.

“That part of the business, which includes B2B customers who buy our cheese for ready meals, is down about 60% versus where the plan was in revenue terms,” says Lactalis UK & Ireland MD Mike Chatters. Conversely, its retail business, which includes an own-label contract with Co-op alongside its Seriously, Président and Galbani brands, is “flying”.

It’s a pattern seen across many of the major cheese brands. Shoppers spent £837m on cheese in the supers in the 12 weeks to 14 June [Kantar], equating to a thumping 23.4% rise in value and 20.8% rise in volumes.

With people forced to stay at home, cheese has cemented its position as a kitchen essential. More than half of Brits (54%) have cooked with cheese at least twice a week in lockdown; 11% used it at least four times a week [Speciality Cheesemakers Association].

So how have the leading brands and retailers dealt with this surge in demand? Which cheeses have benefited the most, and how have smaller brands coped?

This is reflected in sales increases across the majority of cheese categories. The surge includes a 29.7% increase in volumes of continental cheese excluding blue, and a 26.1% volume increase in territorials, while soft white cheese is up 12.6% and processed is up 8.7%.

Only mini portions saw a slump in volumes, with sales down 18% over the 12-week period. That drove a 6.4% decline in volumes for Mini Babybel [Nielsen].

It was perhaps inevitable given the shift in snacking behaviour and fall in the number of packed lunches, as Brits were confined to their homes. However, Mini Babybel owner Bel UK stresses the brand is still delivering strong growth overall, with value sales up 15.9% on the same time two years ago to £72m [IRI 52 w/e 30 May].

Instead of pre-packaged portions, people were “cutting from the block”, Stewart says. And when it came to blocks, the standout performer was cheddar. It has seen total sales jump by £90.4mto £412.4m. For context, consider that the UK’s third-largest cheese brand Dairylea made total sales of £90.9m in the entirety of last year [The Grocer Top Products/Nielsen 52 w/e 7 September 2019]. Retailer and branded lines both cashed in. Own label value sales were up 25.7%, with little change in price, while branded sales grew 32.2% in value, helped along by a 9.9% price increase. 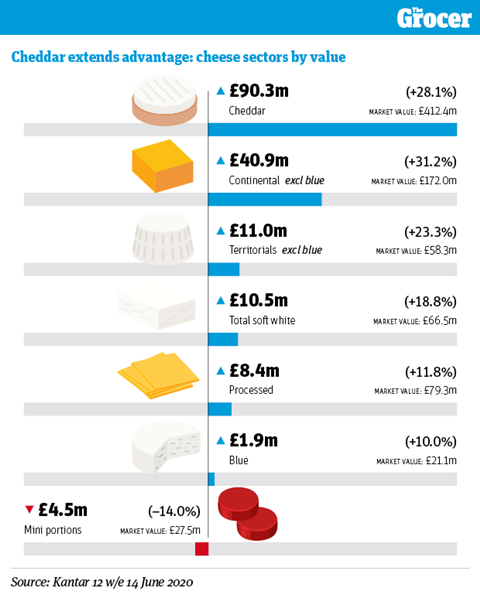 That latter figure is no anomaly. Overall, prices grew 6.7% across the category. Much of this increase can be explained by the well-documented cut in promotions across the mults as they simplified ranges to keep core lines in stock. Indeed, promotions accounted for just 30.5% of cheese sales in the latest 12 weeks, down from 35.1% in the same period last year [Kantar].

Those price rises don’t appear to have deterred shoppers. In fact, their voracious appetite for cheese pushed some brands to the very brink when it came to keeping shelves stocked. “It’s been a phenomenal period of trading – everyone’s been so busy,” says Lee Willett, marketing director of Cathedral City owner Saputo Dairy UK. “We were on daily calls with our supply chain to make sure we kept supplies on shelf.”

That rise in demand saw annualised sales of Cathedral City hit £305m for the first time during lockdown, Willett adds. “Volume sales were up 27% on the back of a 36% revenue uplift during those 12 weeks, and that was driven by core block sales, with volumes up 32% and revenue up 45%.” It doubled down on those soaring sales with a new TV ad.

“Everyone has been so busy. We were on daily calls to make sure we kept supplies on shelf”

But the brand also had to make some difficult decisions to maintain supply. It withdrew low-cal Cathedral City 82 last month due to low sales and temporarily pulled Cathedral City Extra Mature, due to dwindling supplies and the need to “avoid selling it before it has matured properly”.

“There’s only a finite amount of cheese out there, so when you get a 45% increase in volumes, you’re going to struggle to meet demand,” says Willett. “We made difficult decisions to prioritise SKUs, but people didn’t miss out, we redirected them to vintage and mature, and lines are now back in stock.”

It’s a strategy that was mirrored across the board, as suppliers prioritised their bestsellers and pulled cheese out of maturation in order to keep chillers stocked. Premium brands suffered as a result. See Saputo’s Davidstow brand, which took a 10% blow to sales during lockdown, as the dairy giant switched its focus to higher volume offerings.

“The kind of uplifts we’ve been seeing do put pressure on maintaining supply, quality standards and flavour levels,” he adds. “The good thing about Ornua is we have big cheese stocks and were able to get product out without going out of stock.”

Luckily, most of the major producers have similarly avoided major supply issues. Lactalis, for one, managed to meet particularly high demand from the Co-op, as shoppers swerved larger stores and visited local convenience outlets during lockdown.

Continental cheeses proved easiest to supply. “I’m delighted but a bit surprised our supply chains from France and Italy have been as robust as they have been, we’ve had virtually no disruption linked to corona during the outbreak,” says Chatters, pointing to 31% revenue growth for Président on volumes up 27%, and Galbani revenues up 26% with volumes up 18% [IRI 12 w/e 25 April].

Other continental brands such as Bel UK’s Boursin also enjoyed a lockdown bounce, with value sales up 44.9% for the 12 weeks to 30 May [IRI] as it benefitted from the increase in indulgence and evening snacking.

Lactalis, meanwhile, also saw a spike in demand for mozzarella in response to the good weather during lockdown, Chatters adds. “Dependent on the customer, volumes have been up by between 35% to 40%.” The spike in its cheddar brand, Seriously, is also in double figures – value is up 19% with volumes up 14.5%.

While Lactalis has been able to meet this growing demand, Chatters agrees supply has been tight for UK cheddar on the whole. “There just isn’t any excess cheese to be traded. Nobody has excess stocks – everybody is using it,” he says. Some buyers are sourcing more Irish cheese instead, he adds.

Year on year Dairylea value sales are up 5.4%, with Philadelphia sales up 34.7% [Nielsen, 12 w/e 16 July] as shoppers “look for convenient lunchtime options for picnics and mealtimes at home”, Nash says.

Still, the surge in demand enjoyed by the major brands isn’t exactly a bad problem to have. It certainly compares favourably with the fortunes of foodservice suppliers, which have suffered a host of casualties.

Stilton producers have taken a big hit, as the closure of Britain’s restaurants saw sales fall by up to 30% for the six Midlands producers permitted to manufacture it under European PDO rules. Artisan producer the Cornish Cheese Co warned in June that the same circumstances left it with almost 20 tonnes of short shelf-life cheese to sell off.

Mercifully, stilton was helped by the donation of free advertising by outdoor operator Ocean, while its producers and the Cornish Cheese Co benefited from a series of initiatives to sell off excess cheese, including a number of cheese box promotions sold through the multiples. 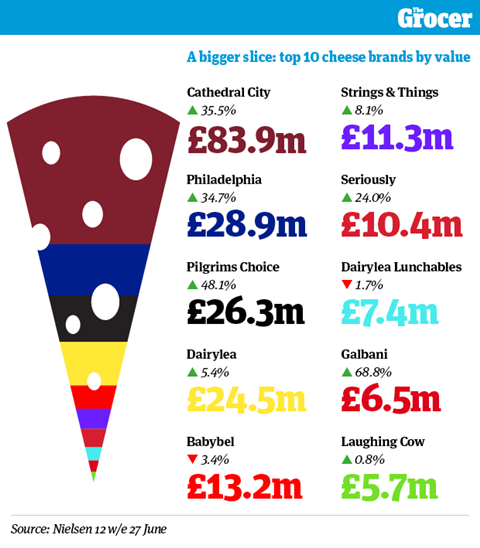 Many smaller brands are similarly using alternative channels. See Wyke Farms, which enjoyed its busiest month ever in March with cheddar sales hitting more than 2,000 tonnes. That was partly down to its presence in the mults, but it also experienced a thousand-fold increase in orders through its website during lockdown.

A pivot towards DTC also benefited Butler’s Farmhouse Cheeses. It launched its Letterbox Cheese delivery service during lockdown and capitalised on shoppers “looking to treat themselves at home” by rolling out The Butler’s Larder: a delivery service for its cheese and products made by other small producers across the north of England.

Wensleydale Creamery made a similar move to launch its new Online Deli after its flagship Visitor Centre and Cheese Experience – which attracts 350,000 tourists a year – was forced to close overnight. The producer says it sold more in a “than we had in an entire month over the same period last year”.

There are other benefits for smaller producers, too. Shropshire’s Belton Farm said it enjoyed a 33% volume bounce in the year to 3 July after capitalising on cheap advertising rates to launch its first-ever TV campaign on Channel 4 for red leicester brand Red Fox.

“Cheese was a frenetic category that was too focused on promotions. It needs more choice”

The crisis has also provided a brief respite from the fierce competition and regular cut-price deals that characterised the category pre-pandemic. “It was a frenetic category that was too focused on promotions and consolidation,” says Wyke Farms MD Rich Clothier. “The category desperately needs more premiumisation and choice.”

With the big brands prioritising bestsellers over pricier lines, there are further opportunities for smaller players. Demand for posher cheese from the supers is likely to grow, given that most Brits still feel uncomfortable eating out in the restaurants where they’d normally get their artisan cheese hit [ONS]. The mults may also prove more receptive to these lower-volume lines now that panic buying has died down.

After all, the dark days of stockpiling loo roll and hand sanitiser are – hopefully – now behind us. 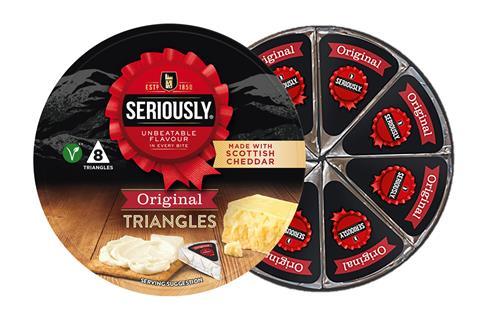 Seriously Tasty Triangles | Launch date: July 2020 | Manufacturer: Lactalis UK & Ireland | Lactalis has been on form in the NPD department of late. The supplier followed up its recent launches of Seriously Cheese Nuggets and Président Brie Bakes with these new, individually wrapped cheddar portions (rsp: £1.40/pack of eight). Lactalis says the products are designed to be enjoyed in a variety of ways including on bread and crackers, in a lunchbox, hot in a mash or even straight from the fridge, and taps into the at-home snacking and food on-the-go trends. 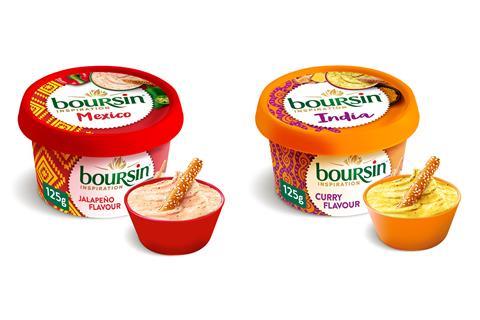 Boursin Inspirations | Launch date: April 2020 | Manufacturer: Bel UK | Designed to bring “an adventurous and flavoursome twist” to the Boursin brand, these curry and jalapeno-flavoured spreads aim to tap into the growing demand for world flavours (rsp: £2.20/125g). With one in five Brits eating more spicy food than five years ago, Bel says the range creates “a big opportunity to attract new users”. 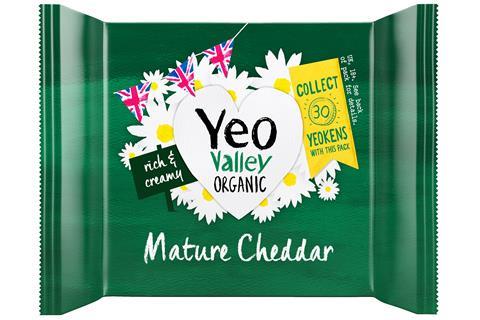 Yeo Valley Organic Cheddar | Launch date: April 2020 | Manufacturer: Arla Foods | Arla’s first major piece of NPD under the Yeo Valley brand licence it acquired in 2018 is an organic mature cheddar designed to democratise organic cheese by bringing it into the mainstream. The block initially went on sale in Tesco (rsp: £3.50/300g), followed by Waitrose. It also unveiled a new mild variant in July. 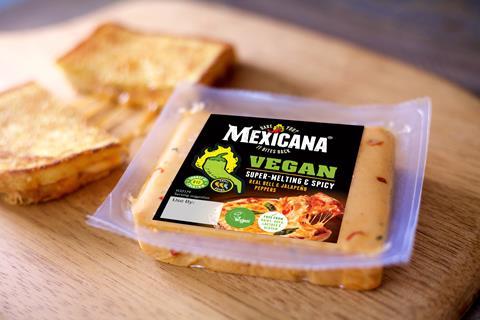 Mexicana Vegan | Launch date: May 2020 | Manufacturer: Norseland | Cheesemaker Norseland has followed up the launch of Applewood Vegan cheese last autumn and a new sliced variant earlier this year with this plant-based variant of its Mexicana cheese. The product, developed by Heather Mills’ VBites, melts quickly and is ideal as a topping for pasta bakes or enchiladas, it says (rsp: £2.30/200g).