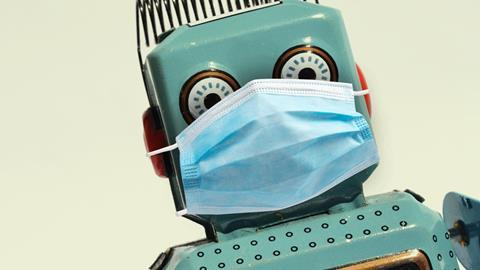 A robot that blazes with ultraviolet light. A ‘car wash’ for shopping trolleys. A cube that produces thousands of litres of bleach a day. The past year has seen a legion of hygiene solutions crop up for fmcg businesses. That’s probably just as well, given that Covid-19 has hit food and drink hard, with retailers and suppliers alike suffering outbreaks.

As the aforementioned examples show, some of these solutions are pretty futuristic. Others are more straightforward. Yet these technological developments, largely made by UK-based companies, all have one thing in common: to ensure safe yet seamless operations in the pandemic. So what’s out there?

For an example of a more straightforward intervention, see the inflatable barriers being trialled at a Nisa store in Leamington Spa to maintain social distancing. Made by Leeds company Airbar-Q, they allow a staff member to hit a button on a remote control that fills the barrier with air, blocking access to an area of the store. Airbar-Q says it’s now in close talks with a number of well-known grocers about a wider rollout.

Another solution that could soon a familiar sight is the automatic supermarket trolley handle sanitiser made by 99point9 Hygiene. The Chesterfield startup recently bagged a £90k grant from the government-funded Innovate UK so its product can be brought to market at the start of 2022.

It’s essentially a more compact take on the initiative Asda trialled last summer in Morley, West Yorkshire. A car wash-style facility called TrolleyCare was set up for use by staff members. It coats trolleys in electrostatically charged micro-droplets of biocide, ensuring areas such as handles, rails and child seats are sterilised.

Developed by The WasteCare Group of Leeds, the waterless system can sanitise up to 20,000 trolleys with a single tank of its anti-microbial solution. And it promises to kill “99.99% of all known bacteria and viruses”.

That is the killer claim – quite literally – in this burgeoning market. However they do it, these devices need to eliminate the threat of Covid in one fell swoop.

Biocide isn’t the only means of achieving that. Rentokil Initial’s Viruskiller air purifier claims to do just with the use of ultraviolet-C light to kill the nasties that pass through it. Its use of UVC is far from unusual. The shortwave light is commonly used in germicidal irradiation, and it’s central to a number of recent innovations suited to grocery.

Take the one unveiled in July by Surrey’s Cennox. Its device is a casing for retailers’ PoS terminals and chip & pin devices. When the lid is closed, a blast of UVC neutralises viruses within 30 seconds.

Put simply, Thor is a big metal tube covered in UVC lamps. Intense light shatters the DNA and RNA of pathogens in the air and on surfaces, “like an opera singer’s voice shattering a wine glass” says Finsen CEO Bill Passmore. “We’re able to bring hospital-level decontamination to the general public.”

Not everyone’s as confident of UVC’s efficacy, however. Paul Cox, chief commercial officer of Ozo Innovations, says: “UV needs line of sight, so if you’ve got equipment with blades and cutters and nooks and crannies, it’s difficult for UV to get to those points.”

Which means a different solution is needed in food manufacturing facilities. For those, Ozo has developed the Elosystem or the smaller Elocube. Both could be crudely described as a high-tech water tank that’s plumbed into a building’s water main and runs off mains electricity.

“UV needs line of sight, so if you’ve got nooks and crannies, it’s difficult to get to those”

The water is heated to around 30°C and salt is added. The solution is then electrolysed, turning it into natural bleach sodium hypochlorite, which can be used to hose down equipment and surfaces. The Elosystem has the capacity to produce up to 150,000 litres a day.

Cox says that’s more sustainable than the cleaning solution traditionally used in food manufacturing: a mix of harsh chemicals and water heated to around 60°C.

This level of innovation shows that, even if Covid shows no sign of disappearing, the food industry is well equipped to tackle it. Coronavirus had better watch its back.

Robots to the rescue: tech to tackle Covid 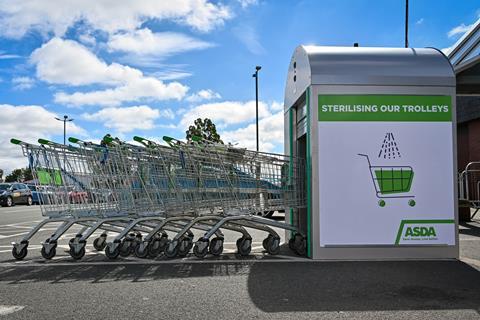 This car wash-style facility is the invention of The WasteCare Group, based in Leeds. It’s a waterless system that coats trolleys in electrostatically charged micro-droplets of biocide, “ensuring a consistent and thorough trolley sterilisation”. It can sanitise up to 20,000 trolleys with a single tank of its anti-microbial solution. Due to the tiny size of the decontaminating droplets, the trolley instantly dries, “resulting in no customers having to wait for clean trolleys”. 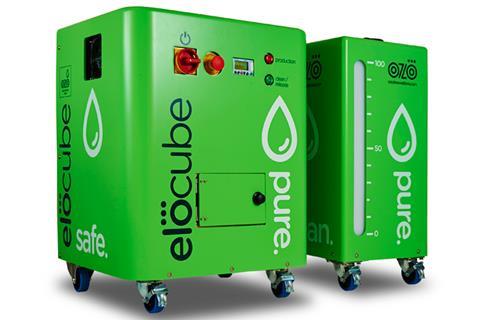 Elocube and its bigger sister, Elosystem, are plumbed into a building’s water main and run off mains electricity. They produce an electrolysed water solution that their maker, Ozo Innovations, calls Eloclear. It’s diluted sodium hypochlorite, a natural bleach. Elocube can produce up to 200 litres of the stuff per day, while Elosystem can make as much as 150,000 litres. The tech “can deliver significant advantages for food manufacturers and processors” Ozo promises. 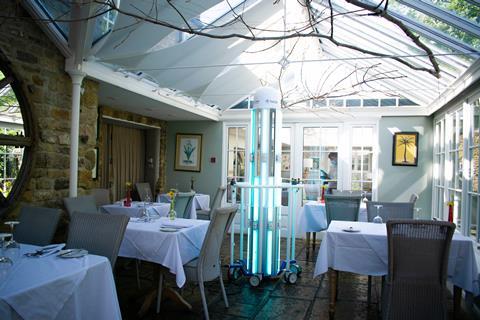 The £40k Telescopic High Output Rapid (Thor) UVC robot is made by London’s Finsen Tech. Once wheeled into a room, its height is adjusted to suit the space, and then it’s plugged into the mains. It throws out intense ultraviolet-C light – which shatters the DNA and RNA of pathogens in the air and on surfaces. Thor’s safety protocols ensure it shuts down if it detects movement by people or animals. It can be leased at £1,250 a month or contracted to visit every few weeks for £600 to £700 a go. 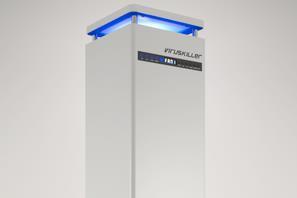 Rentokil Initial launched the Viruskiller air purifier in December – a few months after the World Health Organization recognised that aerosol transmission of Covid-19 can occur “particularly in indoor, crowded and inadequately ventilated spaces”. As air passes though it, Viruskiller uses UVC to deconstruct the RNA and DNA of microorganisms, deactivating their reproductive processes. That means coronavirus and similar nasties can no longer spread.