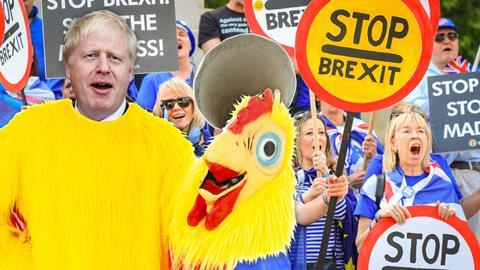 As Boris Johnson et al threaten a no-deal Brexit, the EU standoff is putting one British tradition on the line: the chicken dinner

The chicken dinner is a British tradition. Whether smothered in gravy, breaded or made into hearty stew, its comforting credentials have earned it a solid place in the heart of the nation. And unlike many other traditions, it shows no sign of fading into the past. The average British household tucks into 26 whole chickens a year. That makes for a whole lot of dinners.

It’s not just taste that’s driving this massive increase. There’s also price. At an average of £2.51 a kilo, whole chicken is the cheapest it’s been in five years.

But there is a serious question mark over how long that can continue. Last year, the British Poultry Council warned there could be a 25% hike in prices in the event of a no-deal Brexit. In the worst case, it said Brits could be at the mercy of a “two-tier food system”, with the average Joe relying on “lower standard imports”.

Even in the case of a deal, the devaluation of the pound and loss of a largely immigrant workforce could put pressure on prices.

So could Boris Johnson unwittingly kill off the chicken dinner? Just how far will prices rise? And what appetite is there among British consumers for chicken imports?

A rise in prices is, to some extent, inevitable. Even now, the industry is feeling the pressure. “Last year the cost of producing poultry was actually considerably higher than the year before,” says Jim Brisby, group commercial director at meat giant Cranswick.

“Retail prices are utterly decoupled from the cost of the meat. Retailers compete over it”

That’s because the company imports wheat and soya as the main ingredients for its feed. Already, Brexit uncertainty and its effect on the pound is making that more expensive. For now, the consumer isn’t seeing any of that pressure.

“It’s retail competition that’s driving the prices down,” says Brisby. “Retail prices are utterly decoupled from the cost of the meat itself and it becomes a product the retailers choose to compete over.”

That’s not all. Cranswick is also trying to stop EU workers, who make up 70% of its factory workforce, from flying the coop.

“This is a major issue for the whole of the food industry,” says Brisby. “We’re having to pay people more and we’re also looking to improve the overall working conditions and perks throughout the business, including better facilities. Labour is going to become a highly competitive market.”

At the same time, it has ploughed £60m investment into a poultry factory in Suffolk, dubbed the most advanced in Europe, that is due to open in October. All of which means the continued decline in chicken prices is looking pretty unsustainable.

That’s particularly true of ‘fake farm’ own-label lines, which have been a driving force behind the downward pressure on chicken prices. Take Aldi’s Ashfield Farm chicken thighs, which are the cheapest on the shelf, costing £1.65 per kilo. A kilo pack of Lidl’s new Birchwood Farm offering will set you back £1.79, while the closest comparable product under Tesco’s Willow Farms brand, a 750g pack of chicken thighs, carries a price of £1.66 a kilo. These lines are proving popular for obvious reasons. Tesco’s Willow Farms skinless chicken breast portions have added £25m to the category alone since their launch in summer 2018 [Kantar].

But as much as consumers may appreciate affordable chicken, a no-deal Brexit could make prices of under £2 per kilo unthinkable. Jason Winstanley, head of research and insight at Moy Park, is clear the fallout would “almost certainly” translate to an increase in prices of British chicken.

“In the worst-case no-deal scenario, the price of breast meat could rise by 25%”

The British Poultry Council goes one step further in its concerns. “We estimate in the worst-case no-deal scenario, the price of breast meat could rise by 25%,” says PR manager Shraddha Kaul.

Kaul says this is all down to “increases in the costs of production”, which will be caused by a potentially even weaker pound and even scarcer supply of workers. As prices rise, the BPC is worried that cheaper imports will take the place of British produce among consumers who can’t afford that extra 25%. “Brexit threatens to create a two-tier food system based on affluence,” says Kaul.

As she explains, a no-deal Brexit could increase the availability of cheap imports. Currently, around three quarters of our imported chicken comes from the EU, with the rest coming from third countries - predominantly Brazil and Thailand. That could change under a no-deal Brexit.

The government has stipulated the UK would still impose tariffs on chicken imports, but at a lower rate than is currently charged under the EU’s WTO agenda. And a certain volume of imported chicken would be allowed through tariff-free.

That could pave the way for countries like Brazil and Thailand, which have relatively low production costs, to increase their share of UK imports. And as British chicken becomes pricier, they could even start encroaching on domestic sales. “My concern with a no-deal is that these countries start putting in products that we just can’t compete with on price,” says BPC CEO Richard Griffiths.

Currently, any countries exporting to the UK must meet EU equivalency on food safety and hygiene standards. But the latest exposé concerning Brazilian chicken exports infected with salmonella reaching UK shores suggests those standards aren’t always upheld. And a no-deal Brexit would leave the UK free to relax standards in the pursuit of trade agreements with countries like the US - meaning chlorinated chicken could end up on shelves. 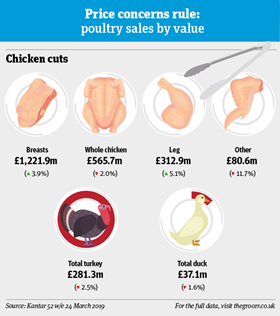 Which is a source of concern for animal welfare organisation Compassion in World Farming. “If the 25% rise in price is realised, such a big increase in costs could lead to an increase of imports from countries with lower animal welfare and food safety standards,” says senior policy manager James West. “This could result in poorer consumers having to ‘make do’ with low quality imports.”

So far, the government has insisted it won’t relax UK food standards after Brexit. But with Trump warning agriculture would have to be up for grabs as part of any trade deal with the US, there is no telling what will happen.

Of course, even if lower-quality imports do make their way into the country, that doesn’t mean they will sell. Research by Harris Interactive for The Grocer in 2017 suggested over 60% of Brits were worried about chlorinated chicken, and only 15% would be convinced to buy it because it was cheaper.

Given those attitudes, supermarkets might also be reluctant to allow chlorinated chicken on to their shelves. “A lot of the retailers have an all-British policy anyway and I don’t see why they would want food hygiene standards going backwards,” says Cranswick’s Brisby.

If Brits aren’t prepared to lower their standards, it may simply be a case of cutting back. Moy Park’s Winstanley believes chicken’s “near-universal appeal” means it is unlikely consumers will cut it out altogether. Still, you only need to look at the performance of turkey and duck (see left) to see the impact of price on volumes. So the era of 26 whole chickens per household might just be over.

Will Brexit help or hinder the UK egg industry? 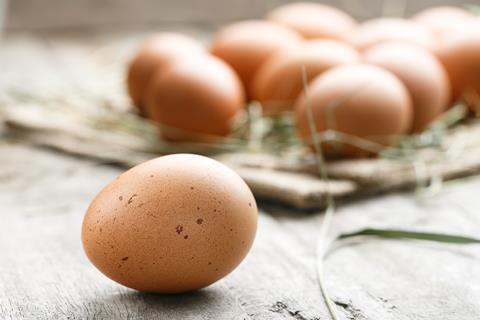 Six of one and half a dozen of the other. That’s the impact Brexit will have on the egg industry, if its major players are to be believed.

While some fear a no-deal Brexit could result in a rise in imports of powdered egg and egg products from battery hens, others see Brexit as a key opportunity to push the credentials of British eggs.

According to the council’s figures, retail sales of shell eggs continue to rise. They were up around 2% in the first quarter of 2019, on the back of 13 consecutive years of growth. The British Egg Industry Council stresses that growth is particularly apparent among British eggs, which rose 5% on the previous year, while imports of shell eggs and egg products fell.

“The UK industry is growing more self-sufficient, with the flock having increased significantly in recent years to meet rising demand for British and growing egg consumption,” Joret says.

But there are undeniable threats. While the government has stipulated that imported meat will be subject to some tariffs in the event of a no-deal Brexit, it hasn’t done the same for eggs and egg products. That means far cheaper imported eggs could start arriving into the UK market.

Farm animal welfare organisation Compassion in World Farming fears this may lead to powdered eggs and egg products being imported from countries that have lower welfare standards.

“We urge the government in the event of a no-deal Brexit to place tariffs on imported eggs, otherwise egg products from battery hens could flood into the UK, undermining British farmers,” says chief policy advisor Peter Stevenson.

Yet that doesn’t mean shoppers will necessarily buy into these products. Research by British Lion earlier this year revealed more than half of UK shoppers want to know from where the eggs in their food products are sourced. It also found 83% of consumers strongly associate the Lion mark with British sourcing and a guarantee of quality.

So in this case, British eggs may still manage to land sunny side up.